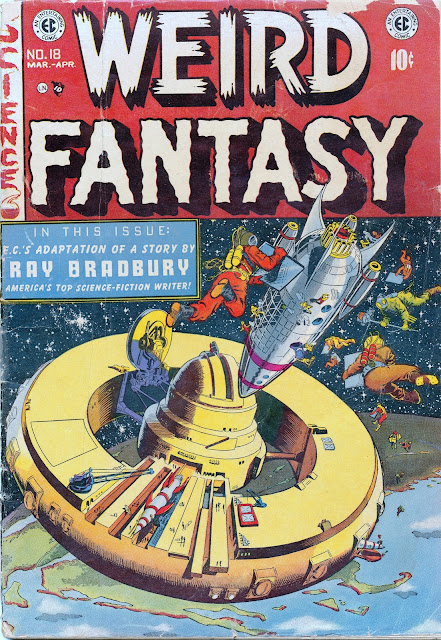 EC's March-April 1953 issue of Weird Fantasy includes a 7-page story titled "Judgment Day", written by Al Feldstein, drawn and inked by Joe Orlando, and colored by Marie Severin. EC subsequently reprinted the story in Incredible Science Fiction 33 (Jan-Feb 1956) to fill in for an Angelo Torres alien planet jungle story that was rejected by the Code.

This (in my opinion) masterpiece of graphic storytelling takes the reader to a future other-world setting, in which humans have advanced beyond the solar system and out into the stars. This planet is one they have seeded with an artificial life form, and a representative of the human race, Tarlton, arrives to inspect the society that has evolved, to see if it is ready to join the Galactic Republic. As Tarlton is shown round, Feldstein uses the scenario as an allegory of the segregated society prevalent in the United States at that time. There are orange and blue robots, and facilities are designated accordingly. The blue robots are the ones that live on the other side of the tracks, and are denied the privileges accorded to the orange robots. Tarlton sees what he needs to see, and points out the flaws in the status quo that have developed in this civilization, citing these as the reason that this robot society is not yet qualified to move to a higher level of existence. The scene in the assembly plant is particularly poignant. That panel on page 6, where Tarlton likens the 'educator' to the family, environment, and societal institutions on Earth that condition a young person to look upon themselves and their relationship with the rest of society in a particular way, is stuff we teach undergraduates and graduates in 'Human Behavior and the Social Environment'. Who says EC didn't really mean Educational Comics!? I'll let the story say the rest for itself.

Again, though, this is EC making a bold statement against the situation that existed in society at that time due to the derailing of the intent of Emancipation Proclamation. The class prejudiced and racist structures in society that impose unequal opportunity for the poor, amongst whom minority groups, including African Americans, are over-represented, remain somewhat effective today, despite official desegregation. And while many, many more people today, especially young people, are free of the attitudes that support this inequality, they may not be the ones with the economic power to effect deep changes to the institutional racism that is still embedded in our society.

That said, I don't want to lose sight of the fact that the United States remains arguably the most advanced nation in addressing and overcoming this problem. We have what appears to be the most diverse society on Earth, and so problems like this have come to the fore first in our country. I'd say that where the US has trodden, others have yet to follow. Observe the inter-racial violence that has been erupting recently on the streets of the UK. Other countries in Europe have also been experiencing huge influxes of immigrants from their old colonies, and there are massive adjustment problems as a result. This EC story may have been revolutionary for America in 1953, but the fact that it existed here at all says a lot. I don't think there is anything even nearly equivalent to this in early 1950s British comics (although I would welcome correction on this point) - Britain was still a virtually monochrome society in 1953 and so was barely beginning to address the issue of racial integration. Demeaning images of non-whites were acceptable, perhaps not even thought about then as inappropriate. When I was a kid in England, golliwogs were standard in children's books, as toys, and even as collectible figures behind the label on your jar of marmalade. So putting it in perspective, it was that constitutional principle of freedom that allowed EC to publish this story in the first place (and why one can argue that the Comics Code was kind of unconstitutional), even though the climate of the times may not have been very much in tune with EC's stance on segregation and racism. But because reformers are allowed to speak out, change can eventually occur, and hopefully we haven't lost sight of that. I wonder if I'll live to see the time that Earth is ready for it's 'judgment day'. 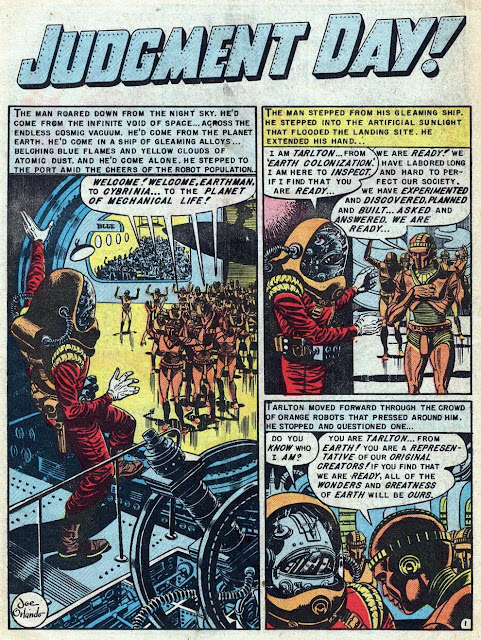 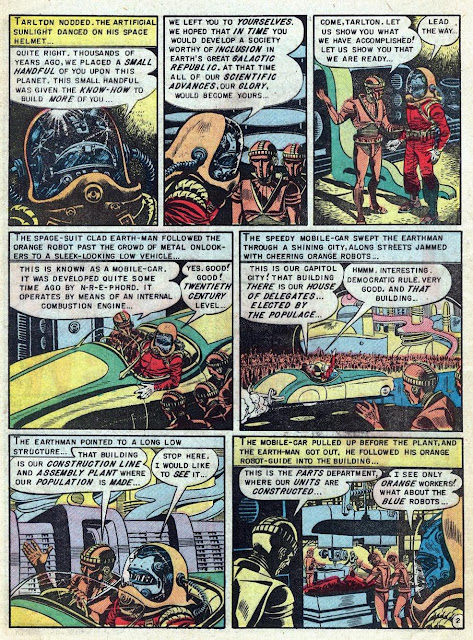 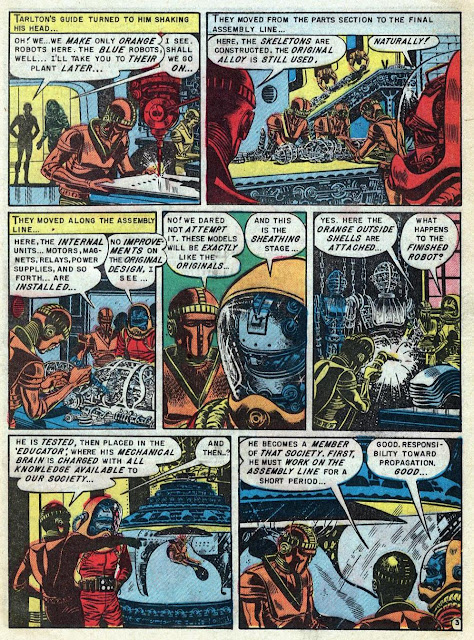 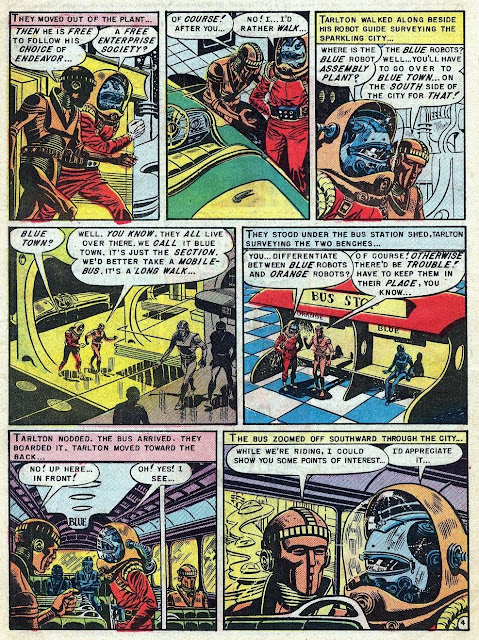 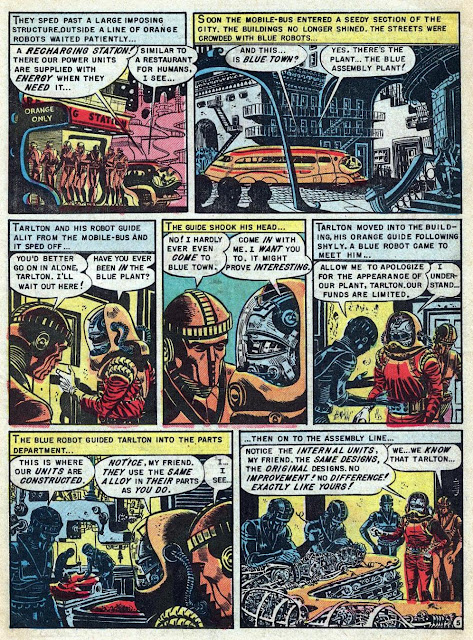 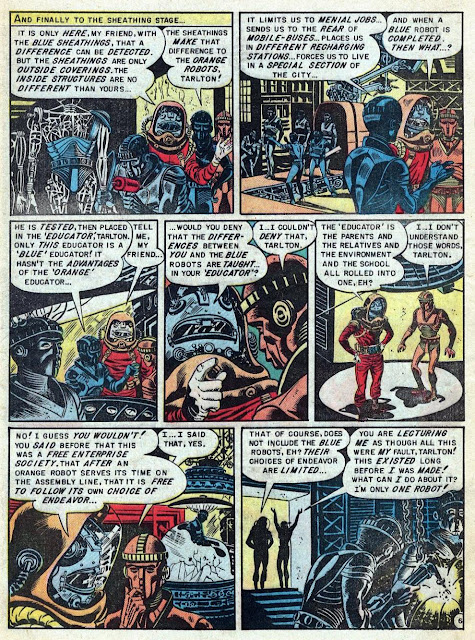 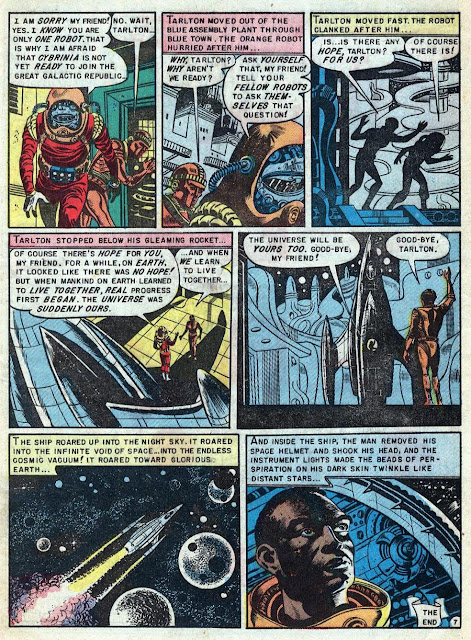 Note: my eternal thanks to Joshua Thirteen for the scans that facilitated the composition of this post.Thanks also to Aaron, The Ghost Who Blogs, for so liberally sharing his extensive knowledge of comics and pointing me in the direction of this story to help me out with my project.
Posted by KB at 9:58 AM