Diversity in Comics: Friday on Sunday 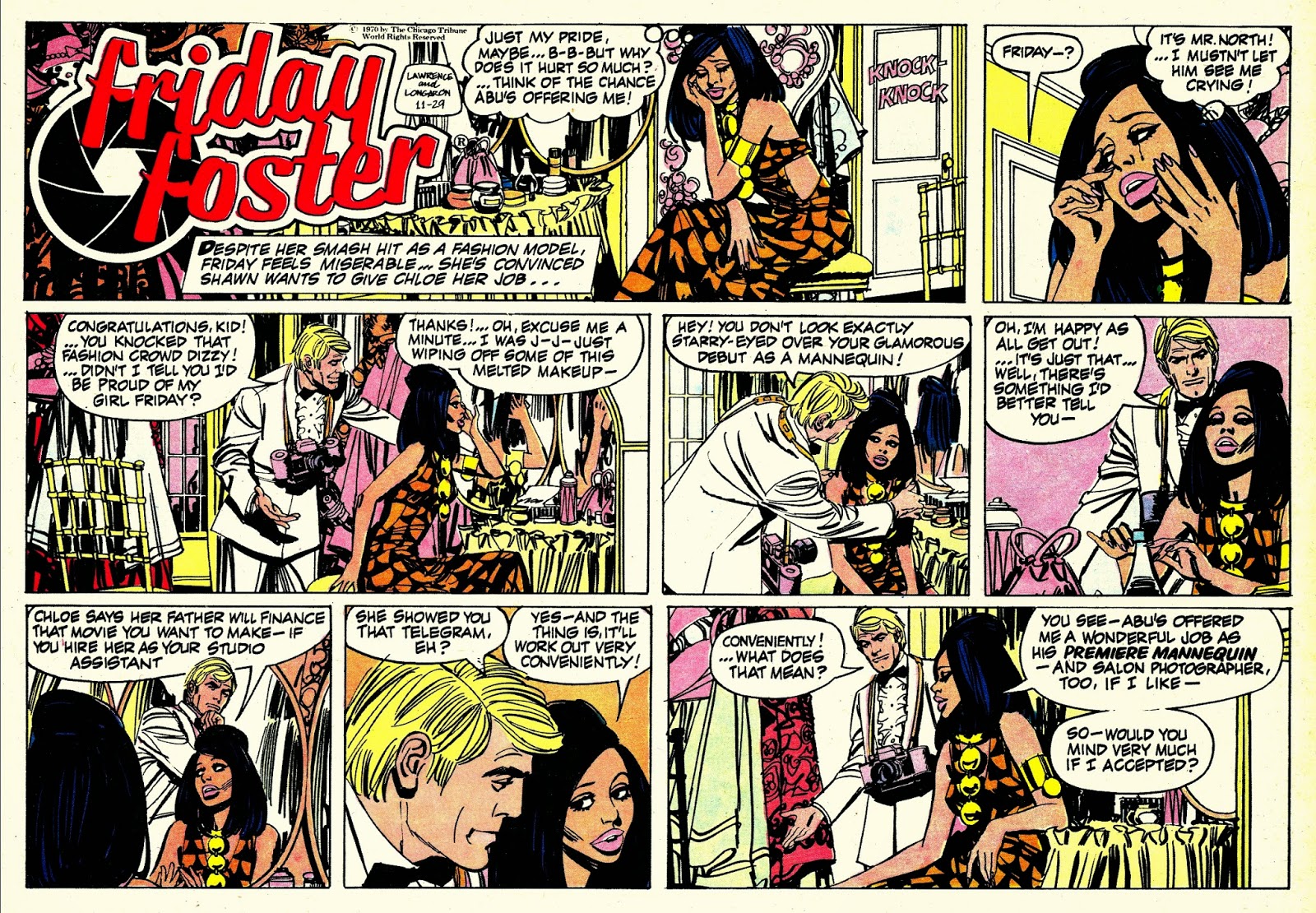 Jim Lawrence and Jorge Longarón's Friday Foster newspaper strip ran for about four years and featured the exploits of the vivacious photographer, whose life was a constant stream of drama and events. Friday Foster was the first syndicated strip to feature an African American female lead character, although Black female leads did exist decades before in the form of, for example, Torchy Brown in Heartbeats by Jackie Ormes, which was printed in the Pittsburgh Courier. But Friday Foster represents a real leap forward on the road towards an accurate depiction of diversity in American comics, besides being a quality strip with fabulous artwork.

The Friday Foster stories included a romantic component, and the strip could be argued to belong to the romance genre as much as any other. The above example is from the Chicago Tribune in the strip's first year - the date is 11/29/1970. Friday gets out of Harlem and ends up being something of a globetrotter, and her adventures are not restricted to being a photographer. She gets involved in all kinds of goings on. Here's a couple of consecutive Sunday strips from 1971 (3/14 and 3/21) in which Friday is unknowingly getting herself enmeshed with members of the criminal underworld: 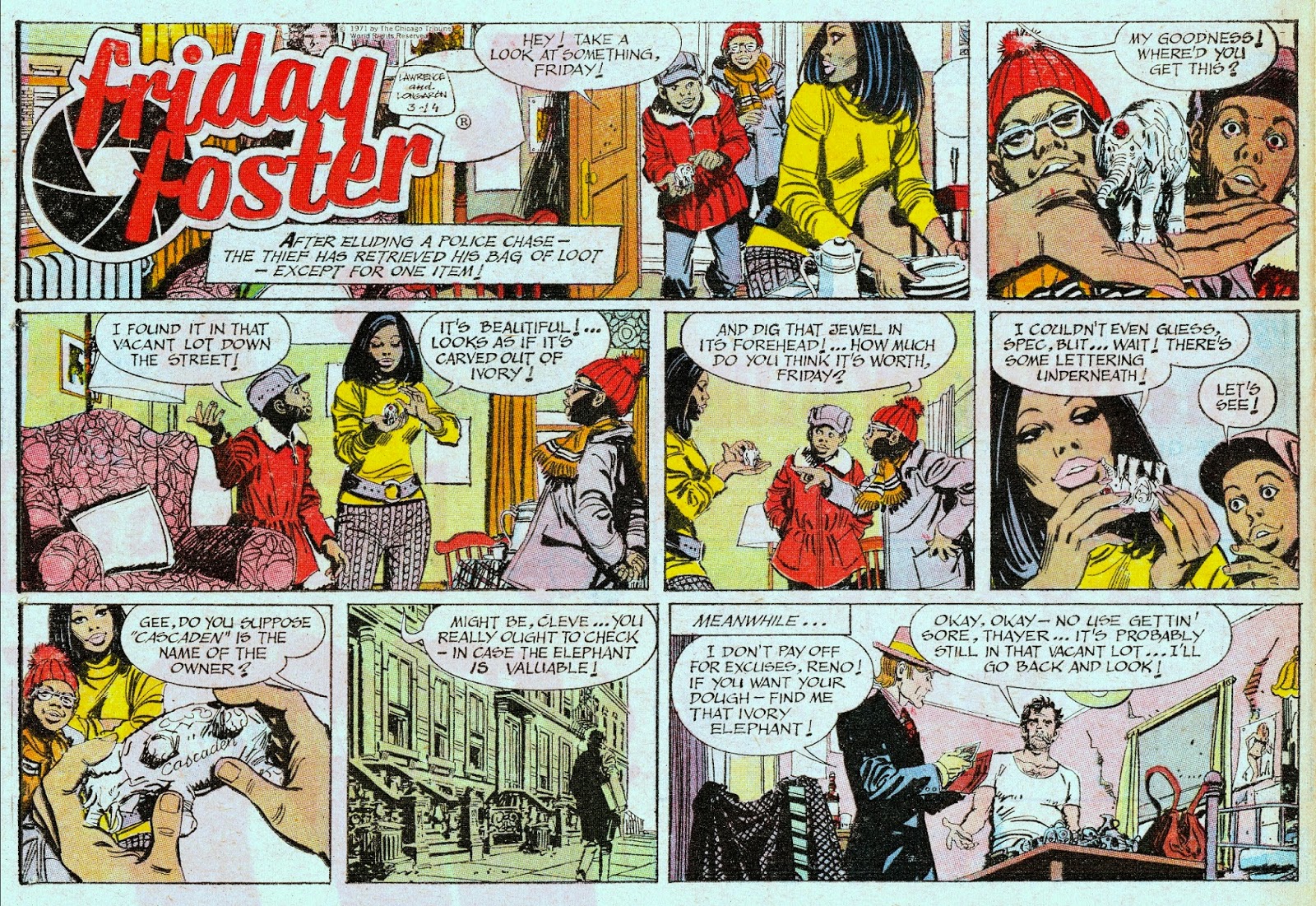 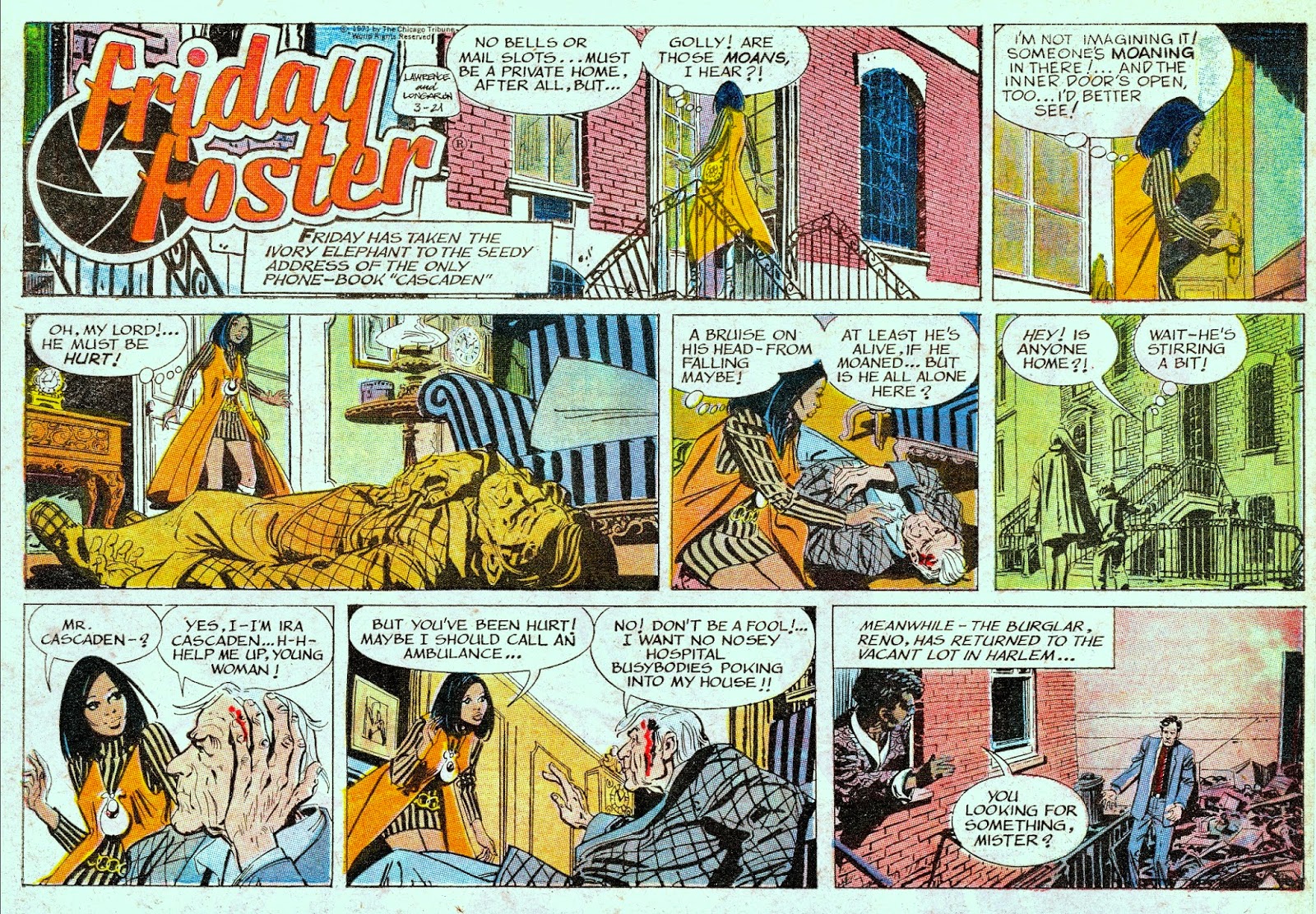 I wish I had the next few weeks' worth of strips so I could find out what happened!

In these next excerpts, from 1972, Friday encounters a big shot Broadway actor, Dirk Maroon, while on a fashion shoot in the Caribbean (07/30):

By the following Sunday, Friday is resisting Dirk's charms, even though those around her seem to think he's a great guy:

But... poor Friday! By the end of the month she's caved in to the pressure, and allowed herself to fall for the player's charms, only to have her heart broken:

The 1972 Sunday strips are too large for my scanner so that's why I'm only showing part of each. These last few illustrate nicely how Friday Foster fits into the romance genre. The single Dell comic book version of Friday Foster was featured a little under a year ago in the premier romance blog, Sequential Crush, and I direct readers there for Jacque Nodell's coverage of that Joe Gill/Jack Sparling rarity.

I can only echo Jacque's lament that there was just the one comic book, and add that there is no reprint collection of these superb newspaper strips either - it's long overdue Dark Horse or Fantagraphics, if you're listening!!! Collecting the comic strips is an expensive business. I haven't come across any of the daily strips for sale on eBay, but the Sundays go for around $3 to $5 each, or more!

There's more information about the strip here and there on the Internet. For example:

Some nice example of the original art are featured on the comicartfans galleries and marketplace:

Anyway, I hope you all enjoyed savoring the wonderful artwork of Jorge Longarón. 'Til next time...
Posted by KB at 11:17 AM 6 comments: