Diversity in Comics: Sealed with a Kiss 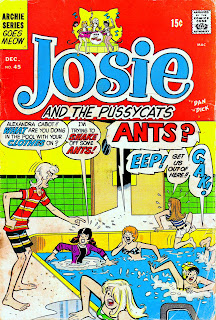 Upon examination, the comic book career of the Archie Comics character Valerie Smith of Josie and the Pussycats is mighty impressive. From her first appearance in 1969 up to the present, she has been a forceful presence in the Archie Universe. Valerie has always been Josie's equal, and often the main protagonist in Josie stories, even in the early days. Archie Comics can been seen over the years since her introduction to have been fairly mute when it comes to outright discussion of race, and their strategy has clearly been to establish diversity through a passive but very present inclusion, with Valerie Smith and then Chuck Clayton being the main vehicles by which they achieved integration. Given that Archie Comics have a heavy, if humorous, focus on romance, it is perhaps surprising that inter-racial relationships weren't in evidence until recently.This post will start with a look at Valerie's first appearance in Josie and the Pussycats 45 (#1), and then bring us up to date with more recent goings on in her fictional life. We pick up the story where Alex Cabot is offering to manage the newly formed group: 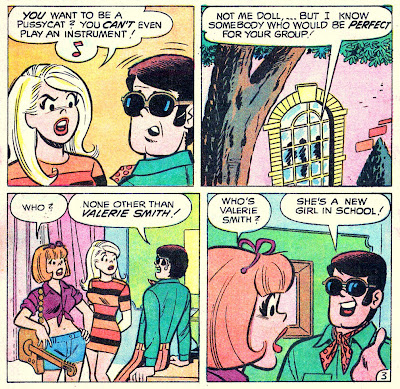 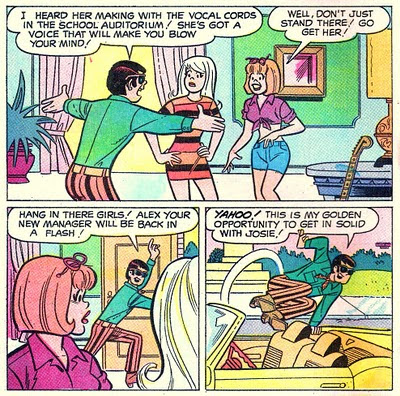 This is leading up to Valerie's first moment in comics, and the very first appearance of an African American character in Archie Comics. When she does appear it's clear that Archie Comics are onto a winner. She's cute without being over the top. She seamlessly enters the plot line and has been there ever since. 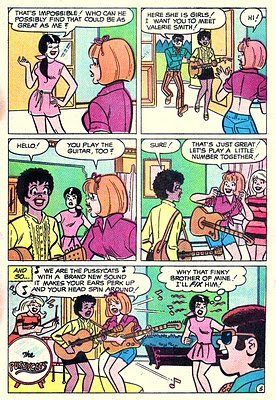 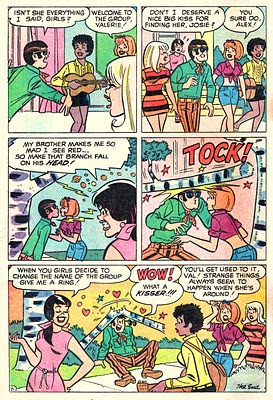 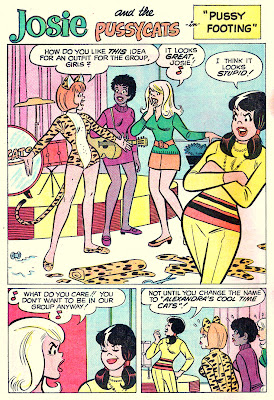 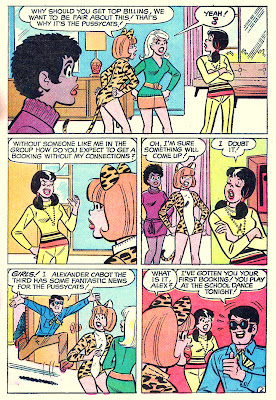 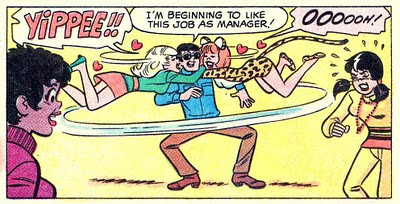 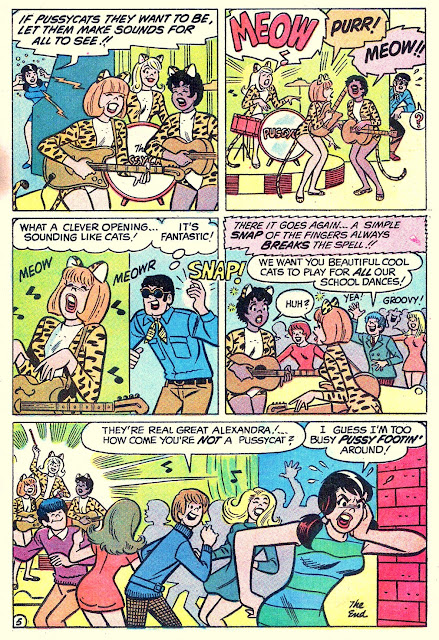 Alex's sister, Alexandra, is continuously green with envy, having wanted to be the star of the group and have it named after her. As it is she has not only failed to be part of the group, but any real hope of her participation has been undone by Valerie's arrival. Alexandra is, however, endowed with some mild witch powers, which she uses again and again to try and upset the Pussycat applecart. Her magic can be nullified by the click of some fingers, and anyway things never seem to go quite how she planned.
Now let's take a look at 21st Century Valerie, in Archie 608 from 2010. The Archies and Josie and the Pussycats are going to tour together. They've agreed on equal billing, but Alex Cabot, thinking he's looking out for his band, has tricked them all into signing a contract that has the Pussycats top of the bill, So when the posters go up... 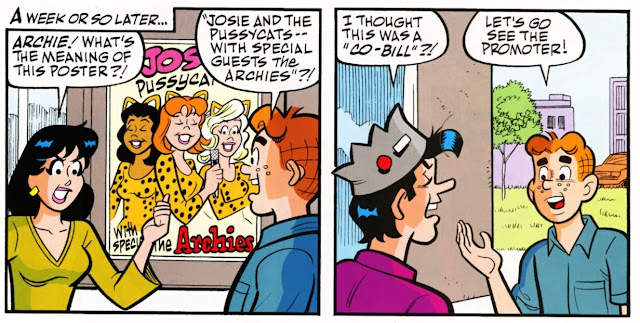 Alex's trickery is exposed in the discussion with the promoter, and it's all sorted out amicably between everybody, leading to... 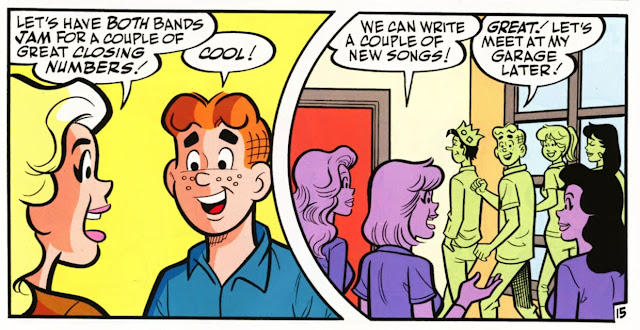 The practice in Archie's garage (The Ramones they aren't!) goes well, and Archie and Valerie have been working together on a song for the end of the show. Everyone else leaves except for these two... 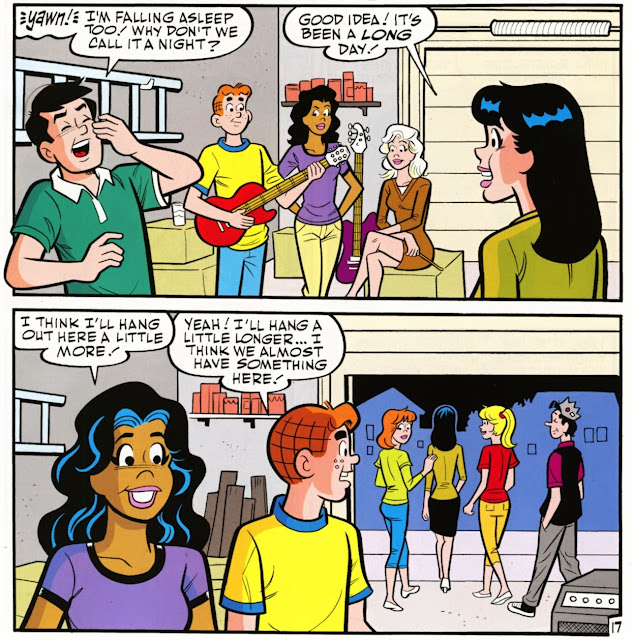 Some real chemistry is there between Archie and Valerie, and the song quickly takes shape, along with something else that readers might have not expected, except it was way up front on the cover, which we're saving for now! 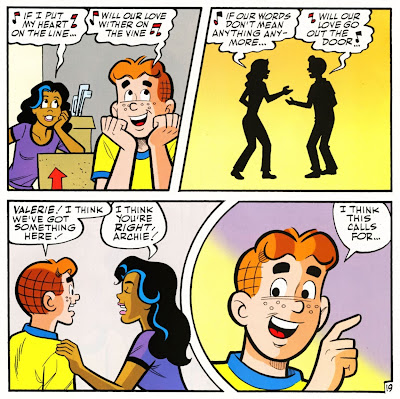 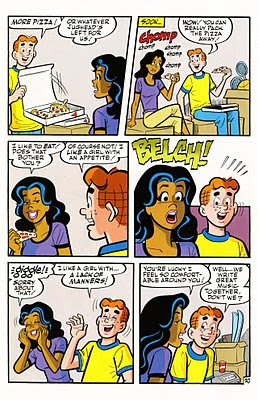 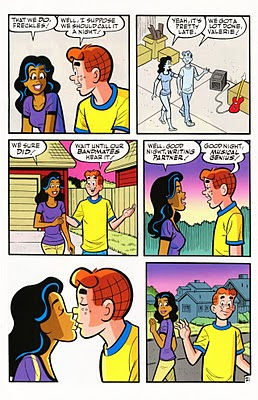 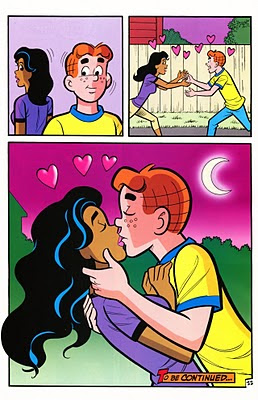 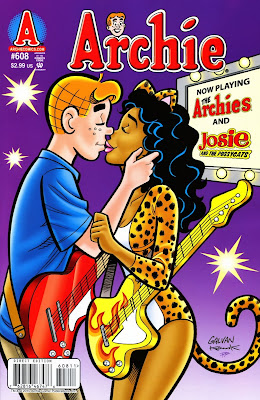 More than 40 years after Valerie's introduction, we have the first inter-racial romance in Archie Comics! I think Archie Comics have to be commended. They have never resorted to blaxploitation. Their African American characters promote a wholesome image, and once diversity was introduced, the company maintained it with a high profile. Once they made that move they never looked back, and its been all positive. For those of you who are hanging on the edge of your seat, here's a bit of what happened in the next ish - starting with the cover, which suggests this romance could end in heartbreak, but it doesn't turn out exactly like it looks. Archie 609 begins with the two bands on the tour. At the end of the set, Archie and Josie sing the song he and Valerie wrote, and this becomes a prompt for both to reflect on the relationship that has developed between them.
Archie and Valerie start seeing a lot of each other outside of work, and inevitably people start to notice 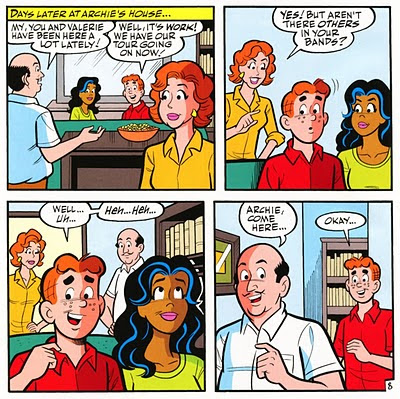 Archie's Dad advises his son that at some point soon he needs to let other people know about his relationship with Valerie, not least because his behavior and inaccessibility has Betty and Veronica wondering. Archie and Valerie agree to keep things quiet until the end of the tour, so as not to disrupt the groups' concentration, but plan on going public once it's over. However, one by one, almost everyone figures out what's going on... 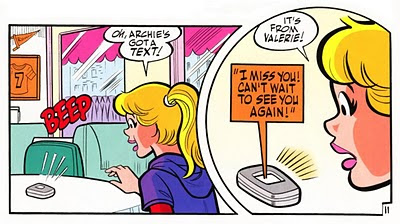 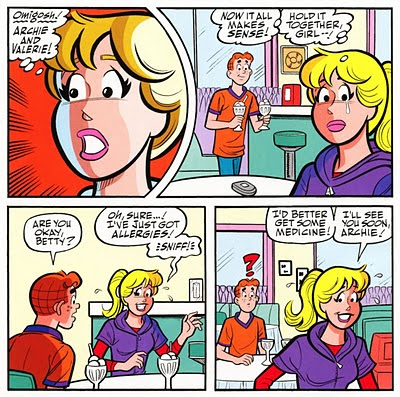 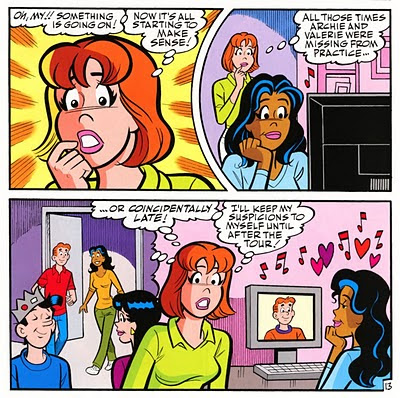 To everyone's surprise, at the end of the last show of the tour, Melody takes matters into her own hands, and introduces a slight change for the last song - it will be sung by the two composers.. 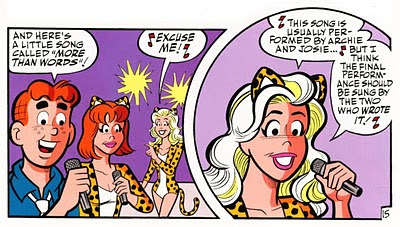 Apparently, by now, everybody is in the know, including the audience, with the single exception of Veronica, who reacts quite angrily to the revelation. But it all goes well, with Archie and Valerie, the two 'love birds', wowing the audience with their own song. This leaves Betty and Veronica with a lot to ponder. 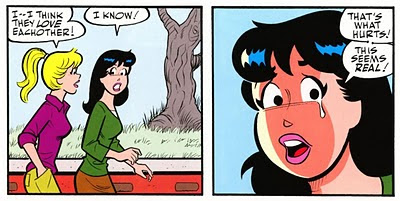 Then fate intervenes. Josie and the Pussycats are invited to do a European tour. Valerie insists she won't go without Archie, but Archie points out that he still has to finish high school, and Valerie will lose out on a chance to build her career if she doesn't go. Does this mean Valerie has graduated already? Is she older than Archie? Or does her career as a musician justify her taking time away from school attendance? Any Archie buffs out there with the answers?
Anyway, Valerie's tears on the cover of Archie 609 are actually, we now find out, because she's going off to tour Europe without him, and they won't see each other for a while. They are going to stay in touch, by texting, etc. The final page seems to indicate that this isn't over between Archie and Valerie at all. 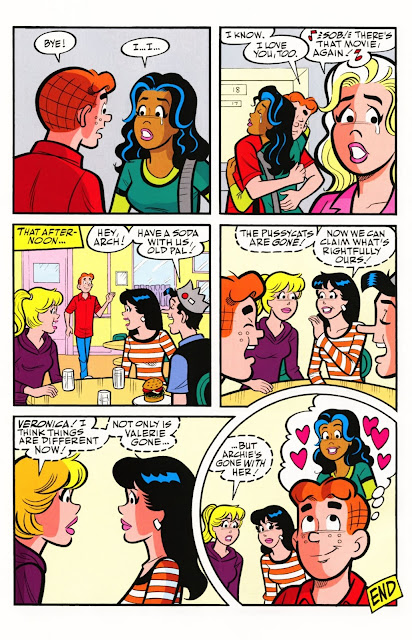 So although the next issue gets into a totally different plot line, maybe there will be more on Valerie and Archie in the future. On reflection, it seems to me that the company just can't go all the way and have Archie marry Valerie, even a few years down the road. He's America's favorite teen, and despite the myriad of clones produced by practically every other company in comics over the decades, he's beaten off all the competition and he's still there. If the company produced a series about Archie's future married life (would he and his wife then become a clone of Blondie and Dagwood?), as they did with the two dreams in which Archie married Betty and then instead Veronica, but in Archie 'real life', might it then spoil the uncertainty that has been a driving force in the series since the 40s - will it be Veronica or Betty who wins Archie in the end? It would make all that rivalry pointless for the reader, because we'd know, from the series about Archie's future, who he ends up marrying, even if it's Valerie instead of either of them. So just how far Archie Comics are prepared to go with this Valerie relationship is difficult to predict. From Betty's reaction in this story it does seem that she actually cares more for Archie than does Veronica, to whom Archie is perhaps something of a desirable trophy.
What is also really interesting to me is that this story is actually a romance. It has no sex in it. It's cute, sweet, and innocent, but from what I can gather it was a real hit with the fans. It does suggest that there is, still, or again, a market for romance comics that don't get dirty. Exactly who the audience for Archie is nowadays would be very interesting to find out. For me, this has raised a lot of questions about what's happening in comics.
Posted by KB at 10:50 AM