As promised, for those of you who enjoyed the Out of This World posts Cute Girlie Stuff: Paper Dolls and Katy Keene, and More Cute Girlie Stuff: Katy Keene Paper Doll Reprise, here's another installment of paper dolls. These are all Atlas/Marvel paper dolls from the career girl teen funnies morphing into semi-romance line developed by Stan Lee. First a few from the 1950s. Patsy Walker was popular enough at that time to be featured in several titles, one of which was Miss America, the others being Patsy Walker, Patsy and Hedy, and Patsy and her Pals. I love these Al Hartley covers and their little snippets of American life from the period. This issue, #89, features art by Morris Weiss, who had been drawing these career girl comics since the 1940s, and I think the paper dolls in this one are drawn by him also. 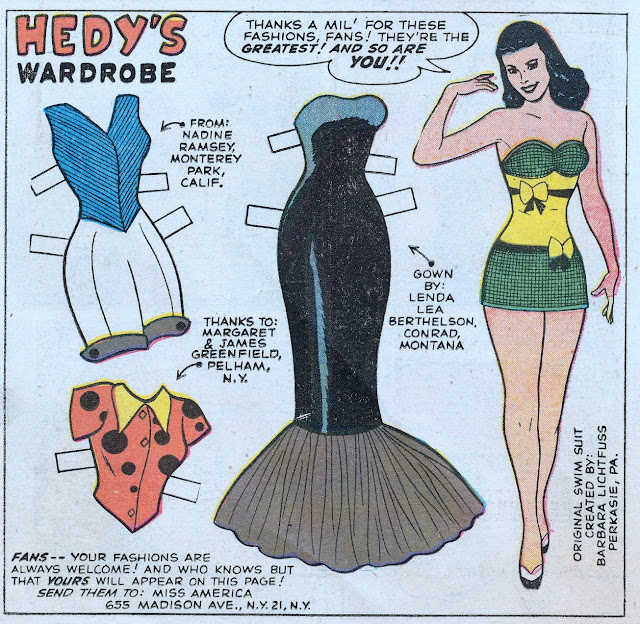 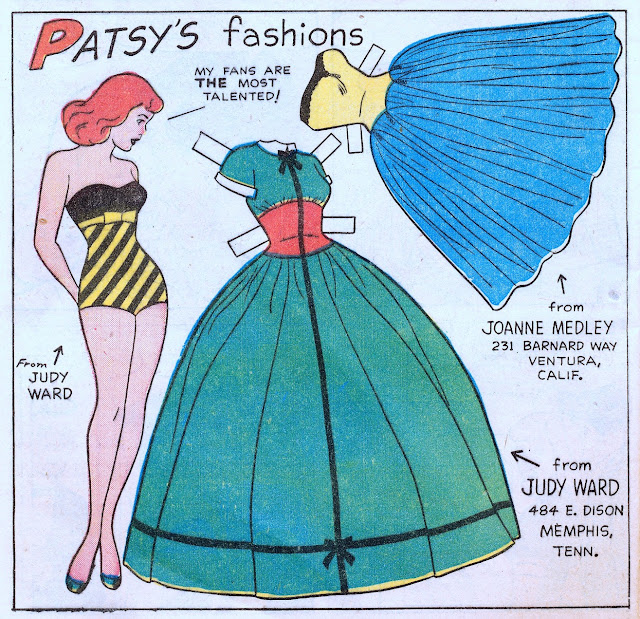 My copy of issue 90 is a bit more beat up but again has a beautiful Al Hartley cover, and I beleieve he drew the paper dolls for this one: 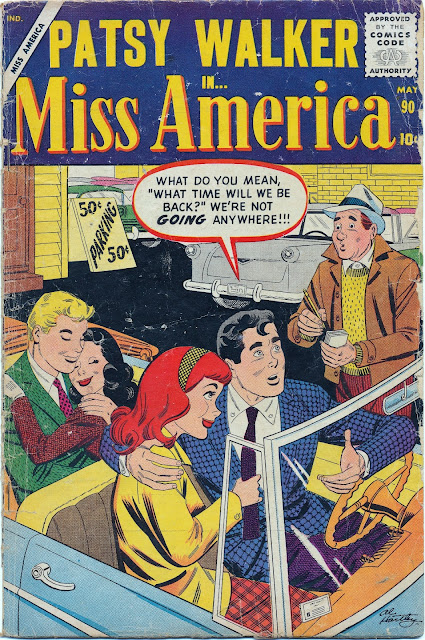 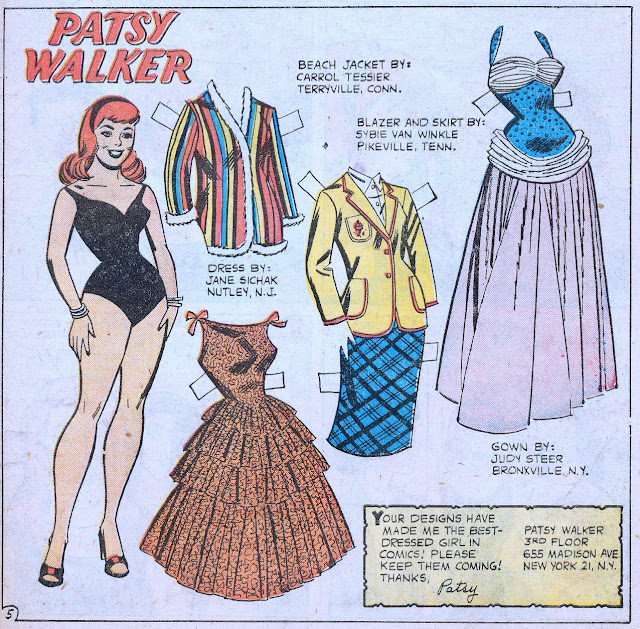 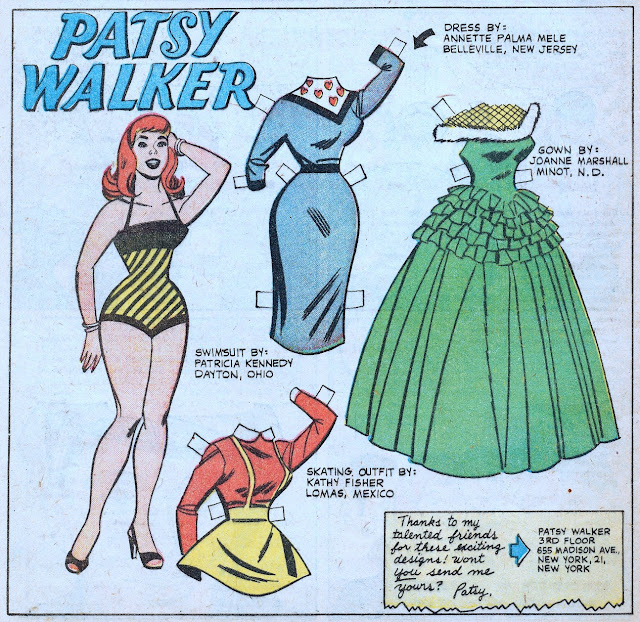 This next one is a Millie the Model comic with a Stan Goldberg cover: 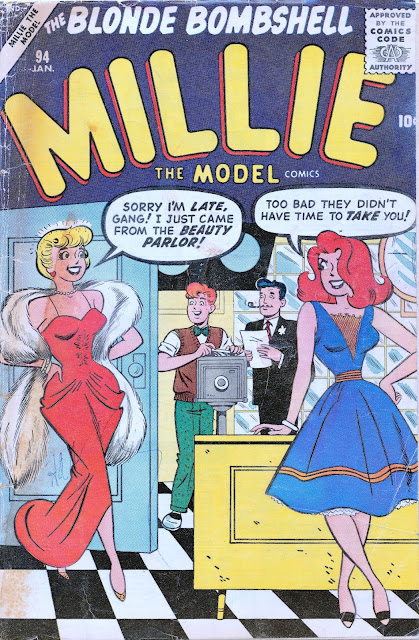 This page of paper dolls was drawn by Henry Scarpelli, as was the coloring page and the half page story and half page paper doll section that follows. Note the free use Stan Lee makes of his signature: 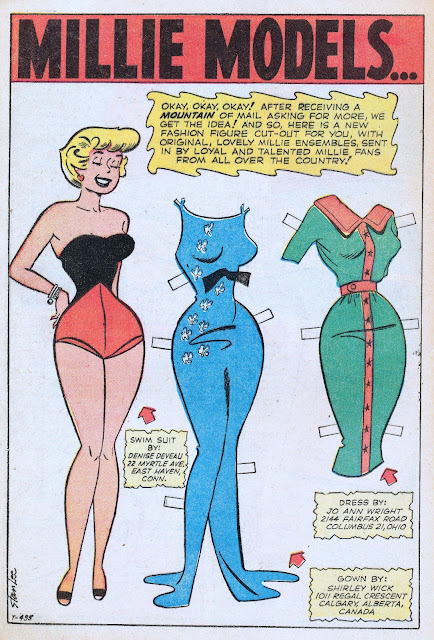 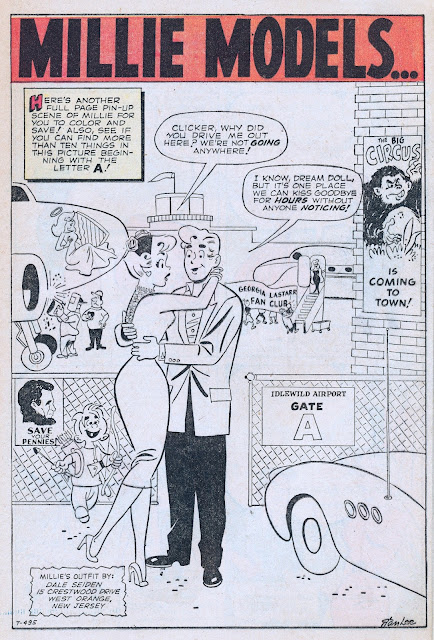 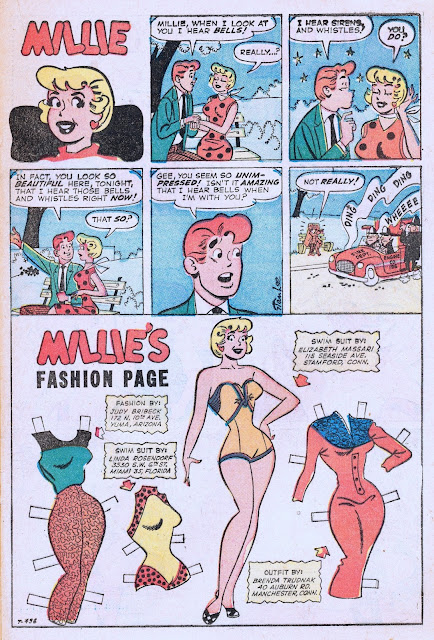 Millie also featured in several titles, maybe not as many as Patsy, but Millie's popularity outlasted Patsy's in the end (except Patsy became reincarnated in the Marvel superhero universe). In the 1960s, besides the main title, Marvel also published Modelling With Millie. Here's a few examples of issues featuring paper dolls, including one that demonstrates desegregation and racial integration in comics. The Afro-Caribbean British character, Jill Jerold, in Millie the Model and Modelling With Millie was an early example of the respectful introduction of diversity into mainstream comics. All the artwork in these appears to be by Stan Goldberg, but again Stan Lee is very liberal with his signature. Note that these later paper dolls lack the tabs. 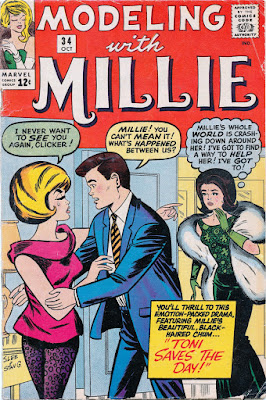 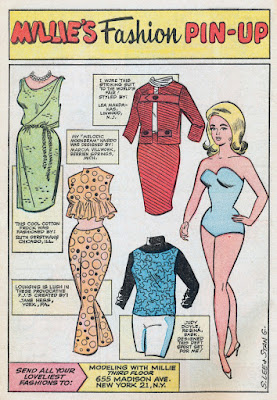 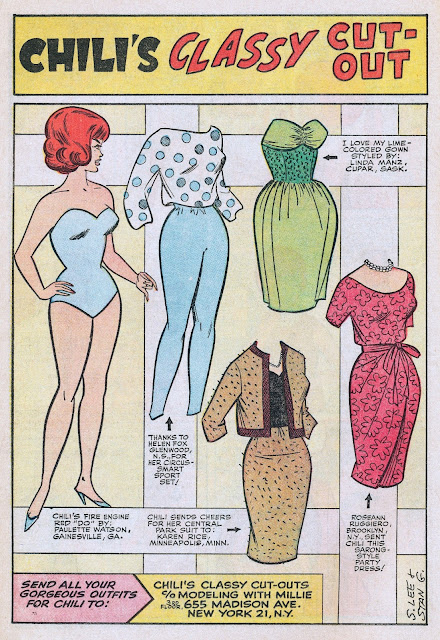 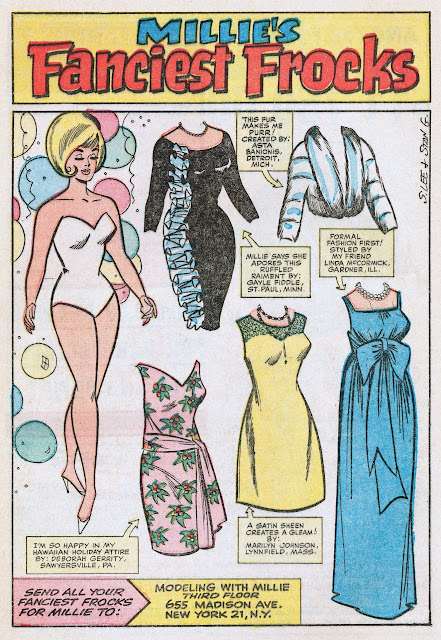 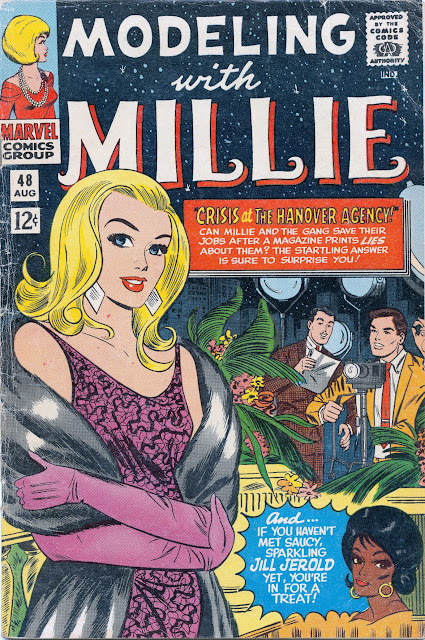 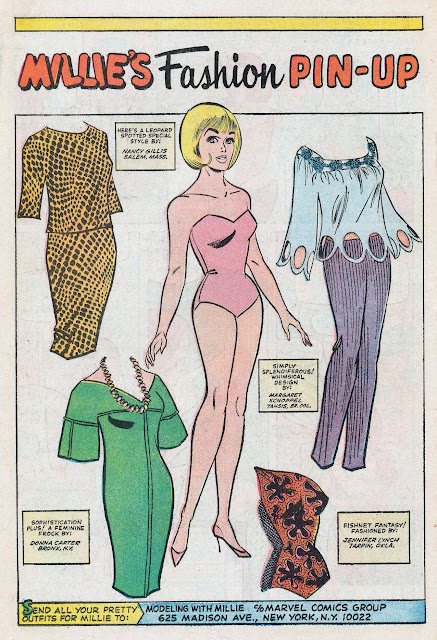 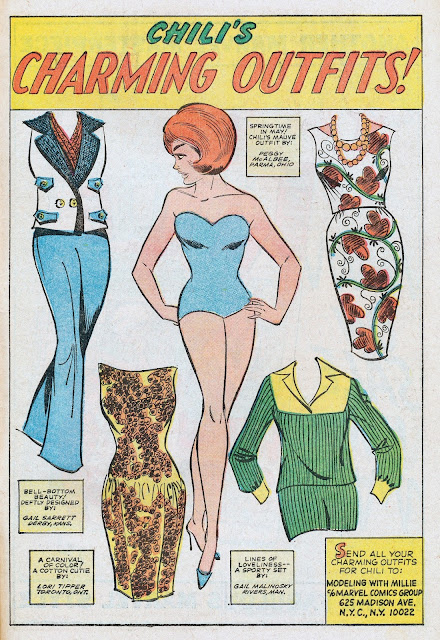 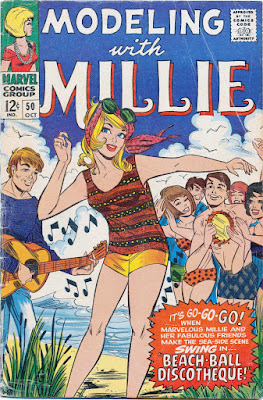 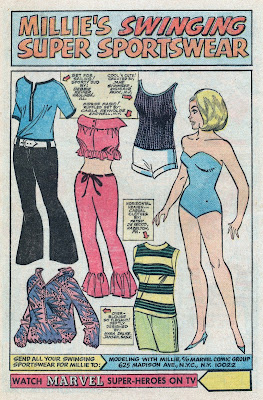 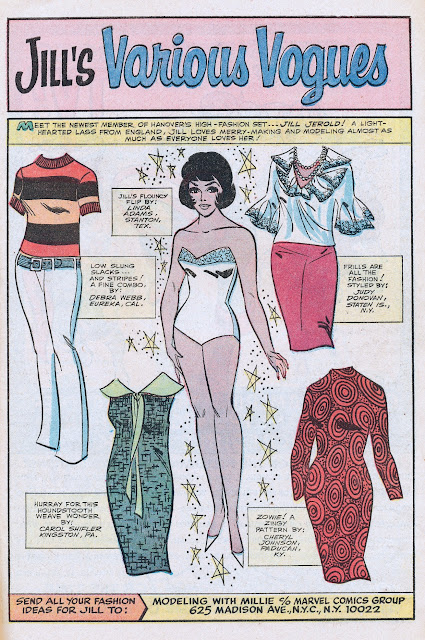 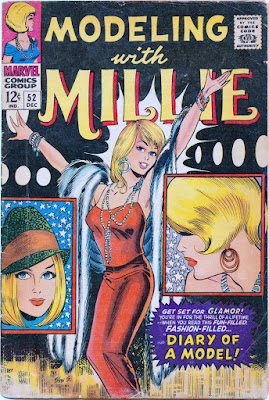 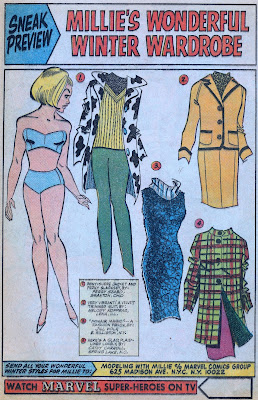 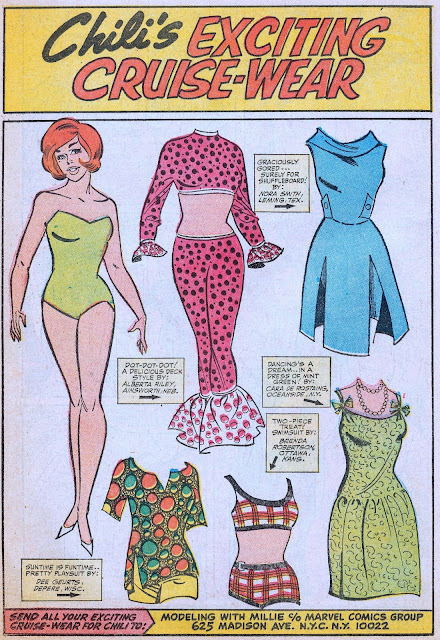 So I hope you paper doll fans enjoyed these pages. That almost exhausts the paper dolls in my comic collection. I know I have an old Katy Keene Annual somewhere, plus one of the more recent Katy Keene comics with some paper dolls. I'll post those when I find the annual. Paper dolls are one of the most fascinating human artifacts to come Out Of This World!
Posted by KB at 8:06 AM