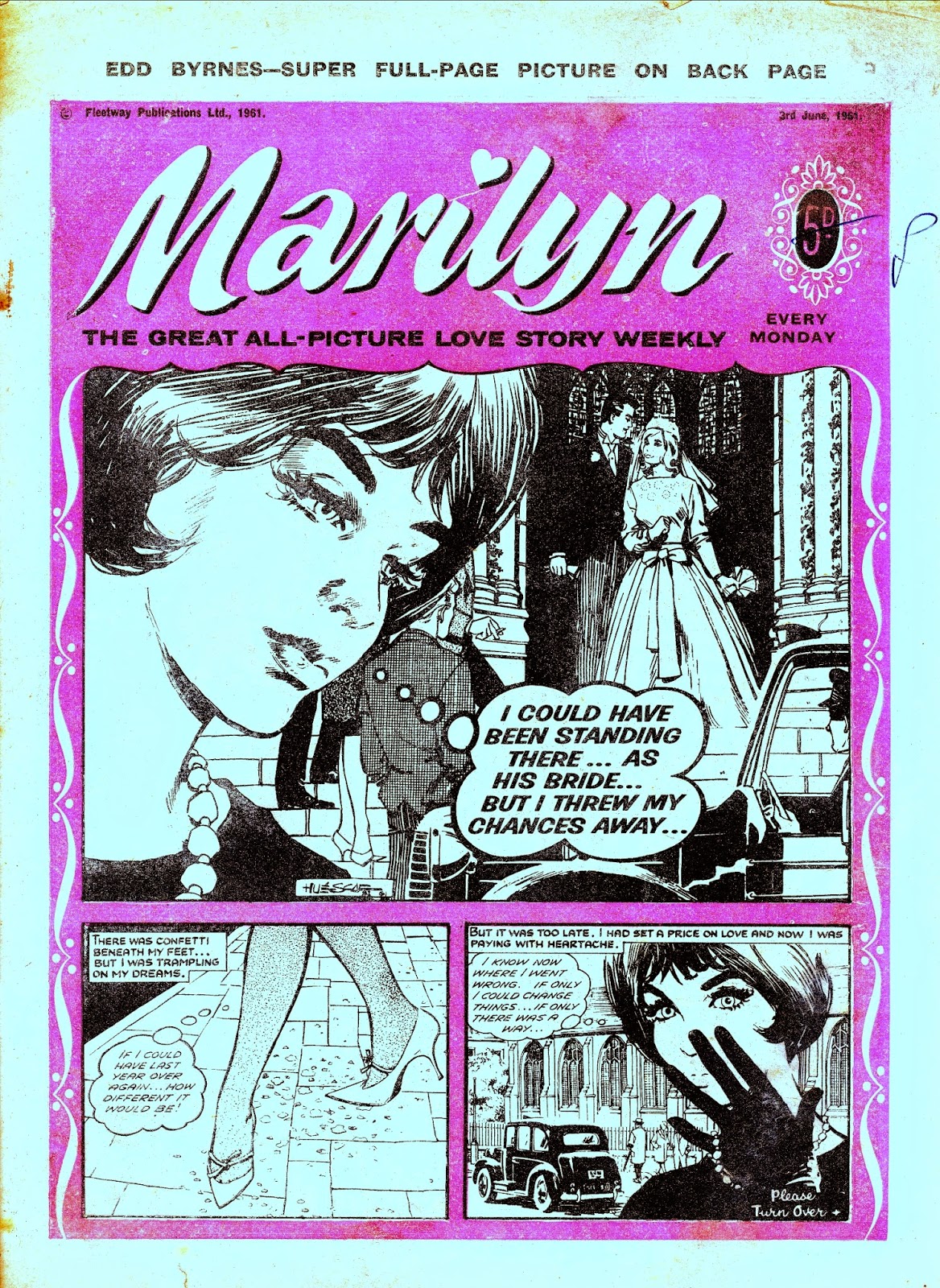 British girls' comics of the 1950s through 70s consisted of a complex, stratified assortment of publications designed for specific age-related markets. In retrospect, the most famous became Jackie, which has been discussed previously on this blog. According to James Chapman in his British Comics: A Cultural History:

That's a lot of comics, especially considering they were weekly! But so few seem to have survived. These comics are so rare nowadays that collecting a complete set would be extremely difficult, and very costly. In this post we're going to take a look at a copy of Marilyn, the June 3rd 1961 issue, and dissect it to see what it's made of.

Of particular note is that the first story starts out on the front cover (see above), which seems to have been the norm for the Amalgamated titles (see Valentine 21st December 1963 on Out of This World). Counting the cover, this is a four-pager, untitled, but the art is signed and possibly by the famous Spanish comic artist José de Huéscar. It is certainly a fine piece of work. The story seems to be a cautionary tale because we see Julie (lamenting at another woman's wedding on the front cover) lose the man who loved her, because she wanted too much in the way of material comforts, that he couldn't guarantee on his honest, livable, but working class wage. 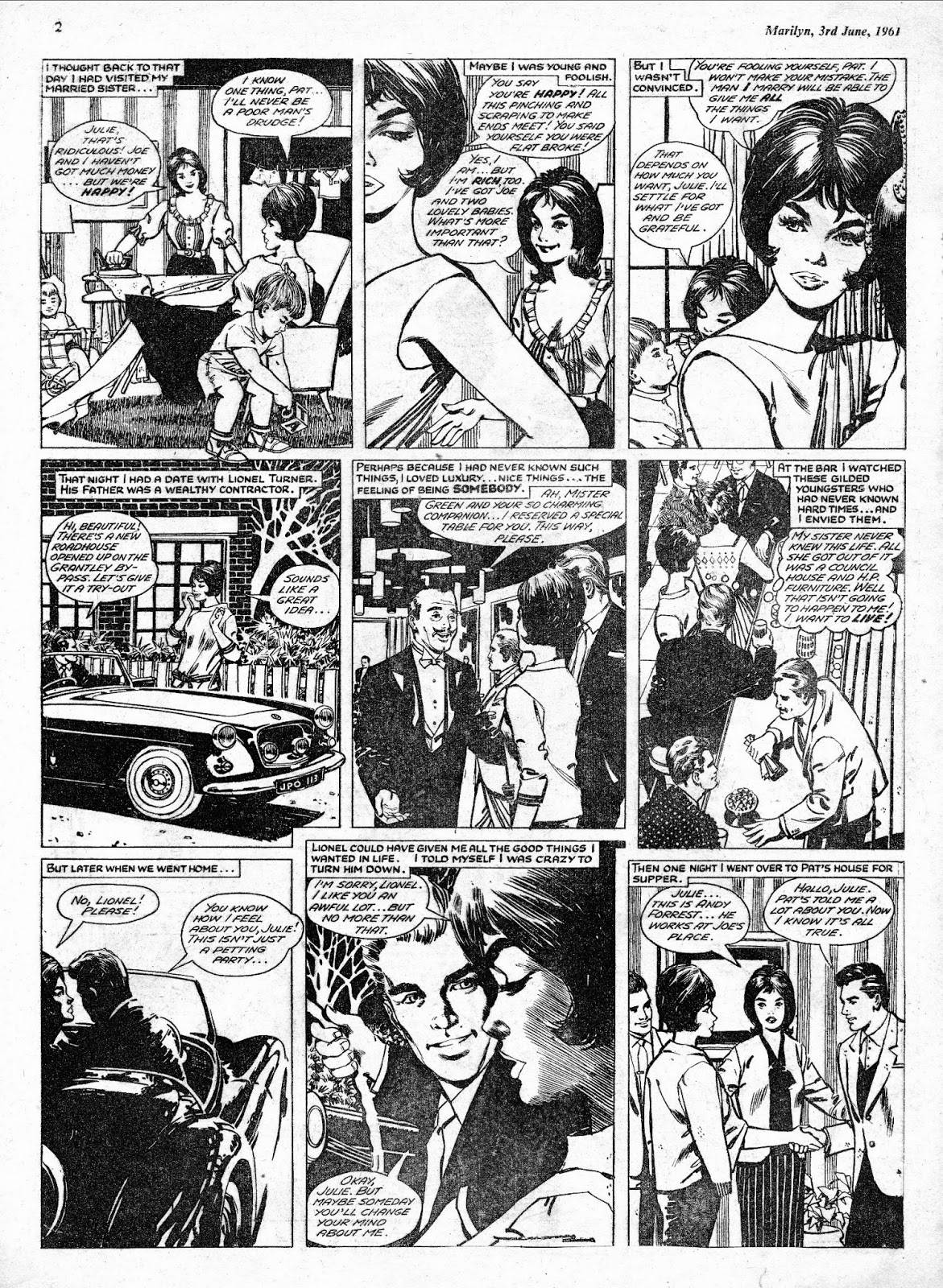 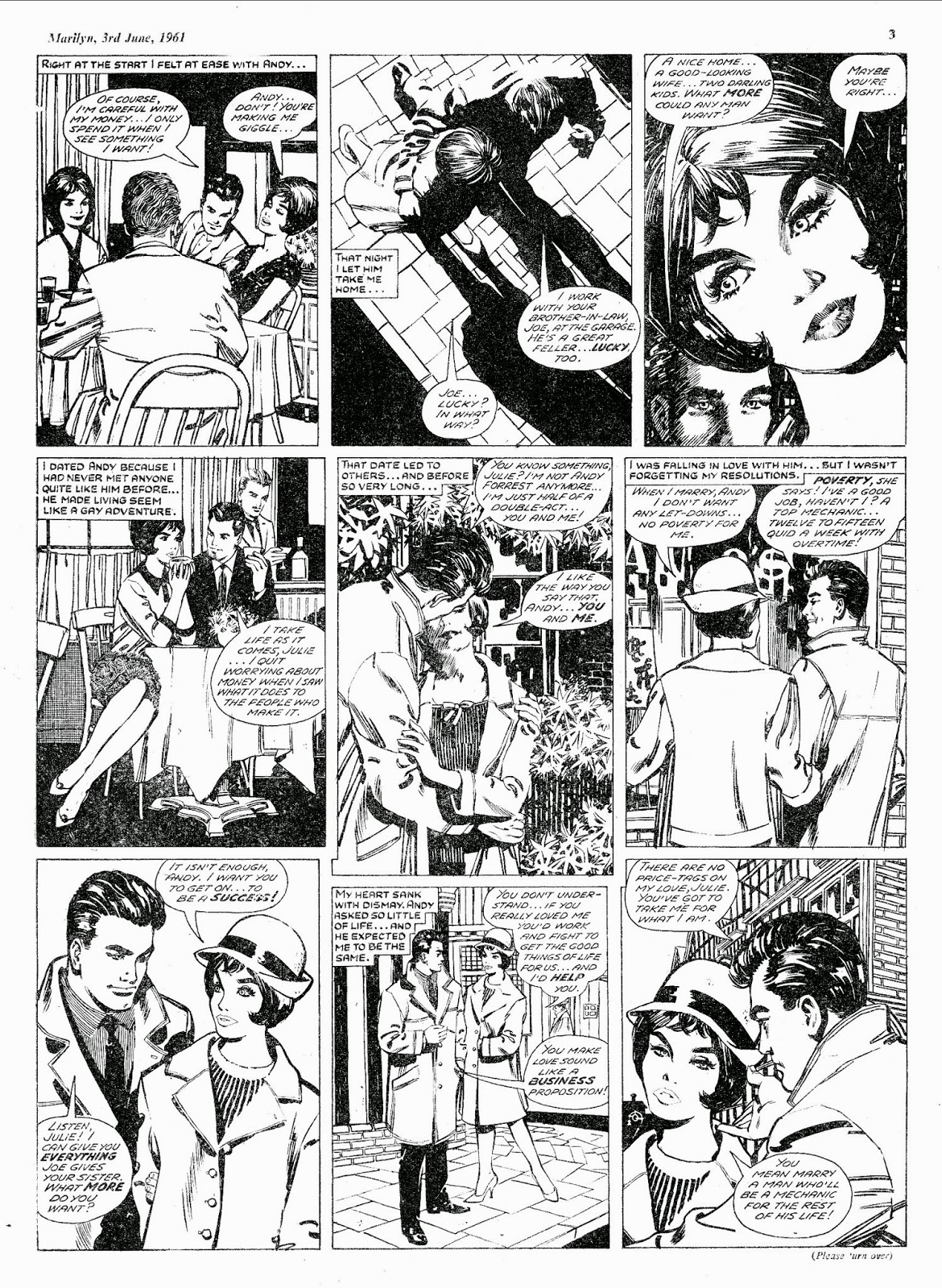 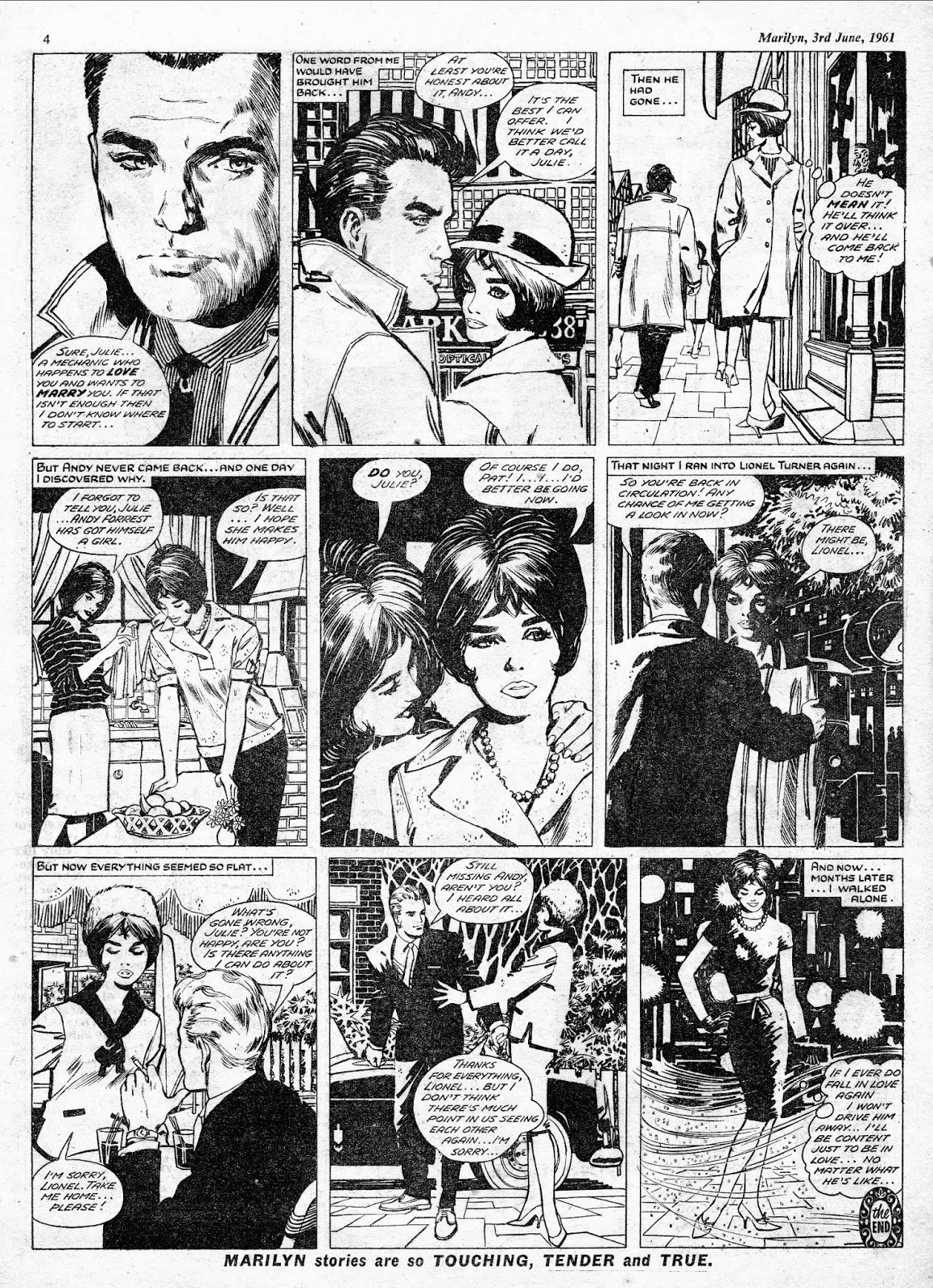 Page 5 features advice for young Beat ladies with fair complexions, with the summer just upon them. From what I remember we did have quite a good summer that year in the UK, so it was a timely intervention by the publisher! 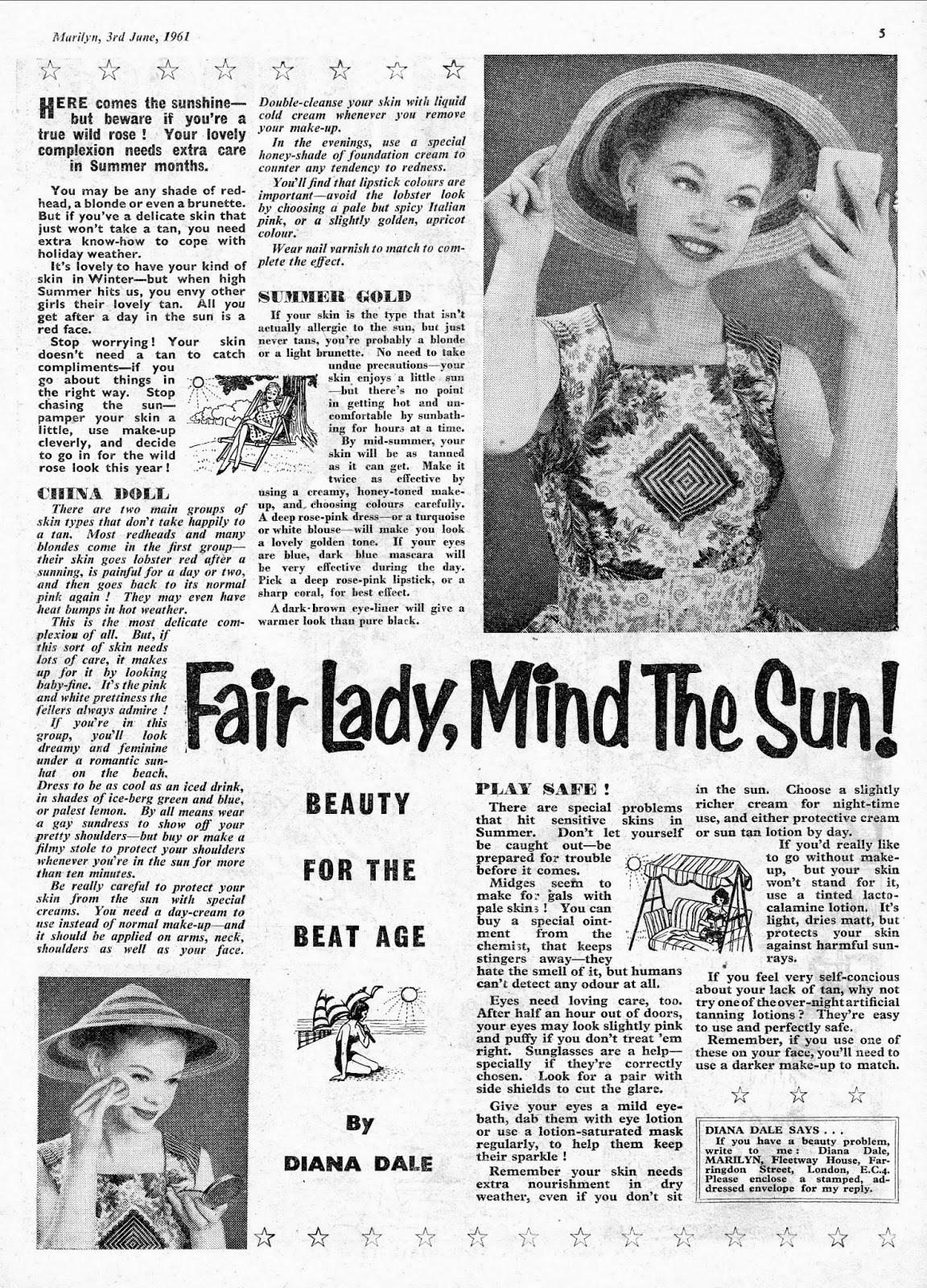 While the first story in the comic was complete in four pages, the next is a two page installment in an ongoing court drama and love story. Very nice artwork. Different style. 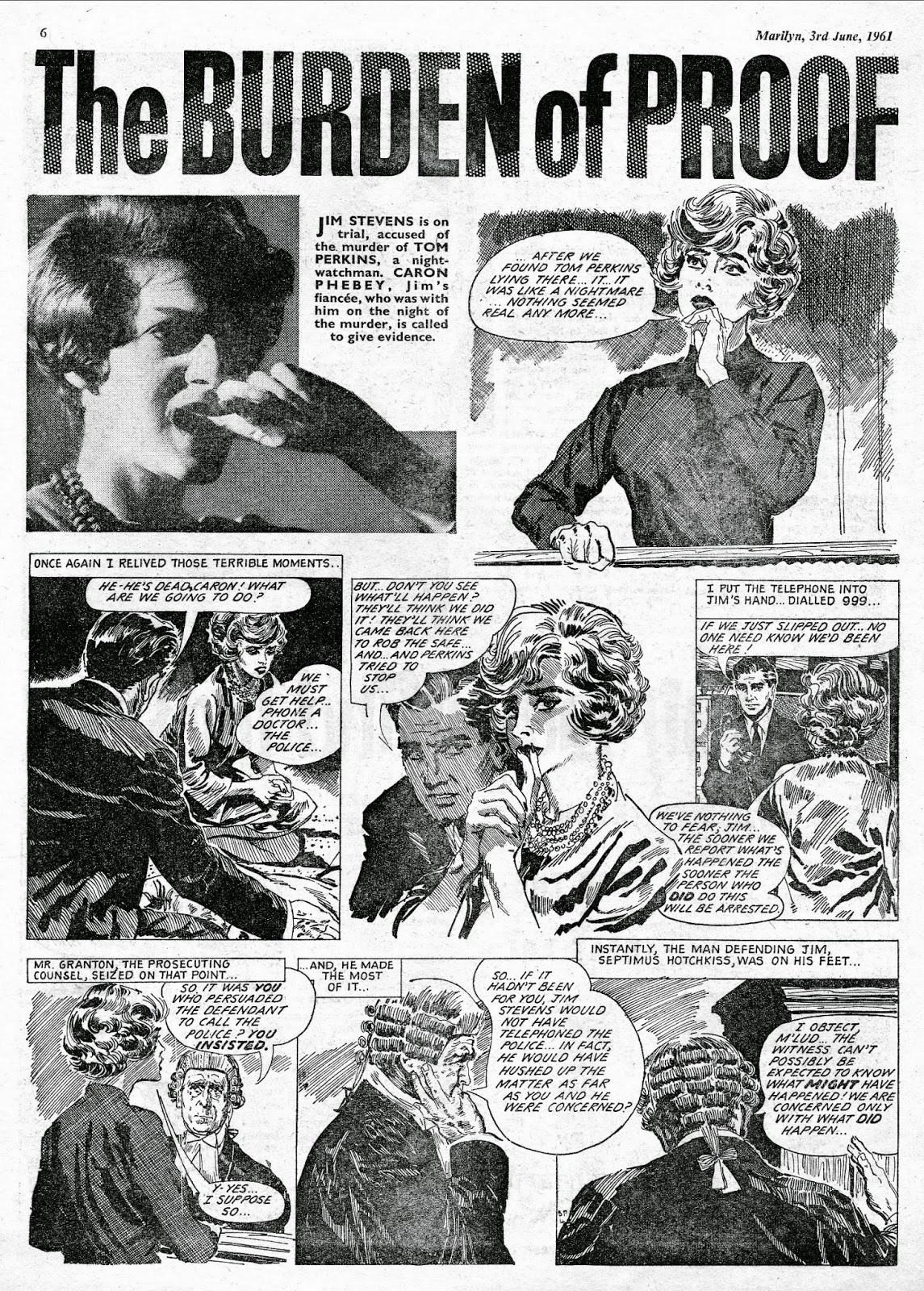 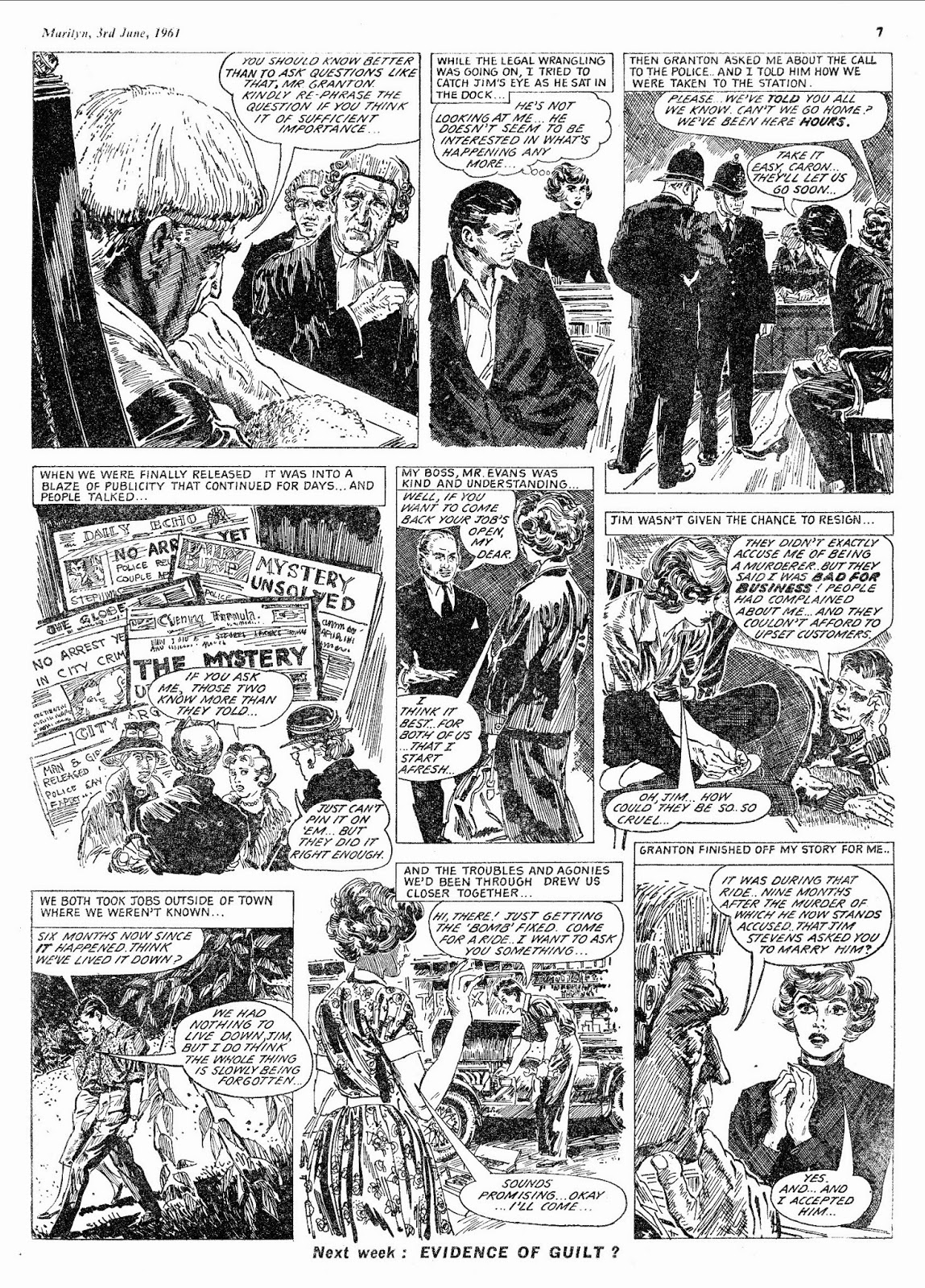 This next one pager seems to be a regular feature. Tab's a bit of a ladies man, and he has them competing for his attention by having a bake off! 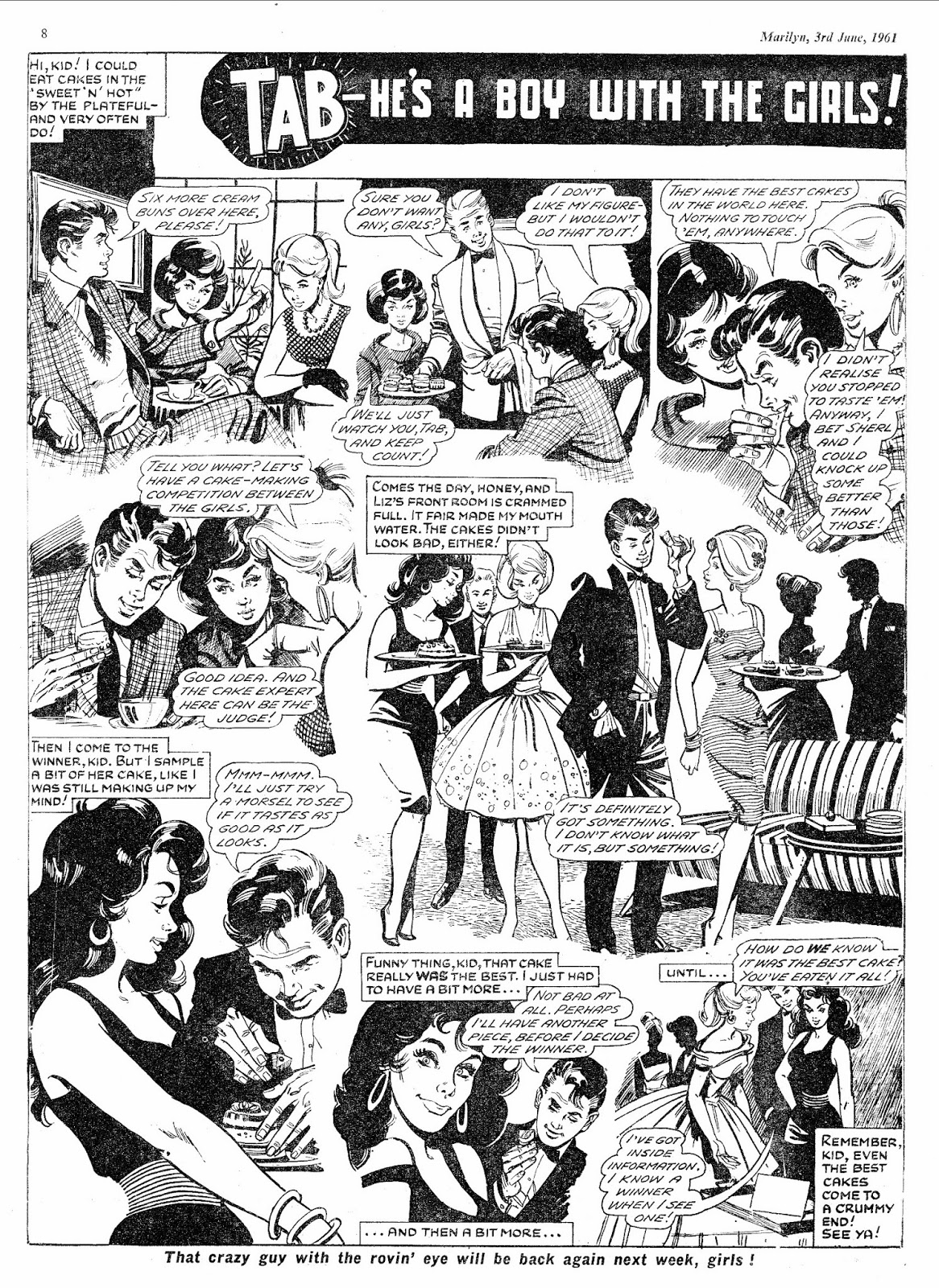 Next, a good old romance comic horoscope, plus an ad for hair dye! 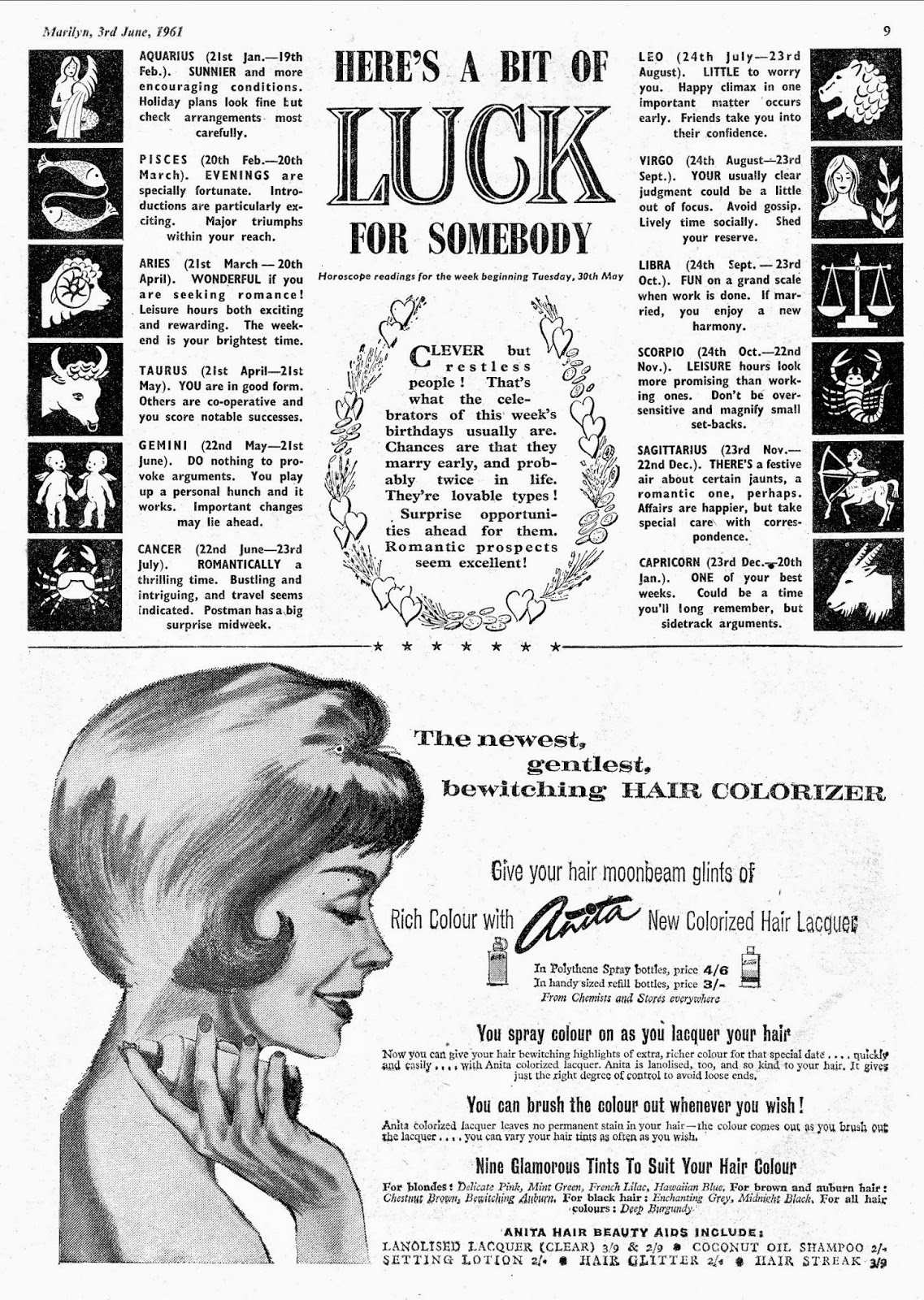 Next, a three page story, another cautionary tale, in which a girl learns a hard lesson when she uses one boy to make another jealous. The artwork, identified by blogger James Zee, is by Eugenio Giner Martí who worked for Spain's Selecciones Illustradas agency. 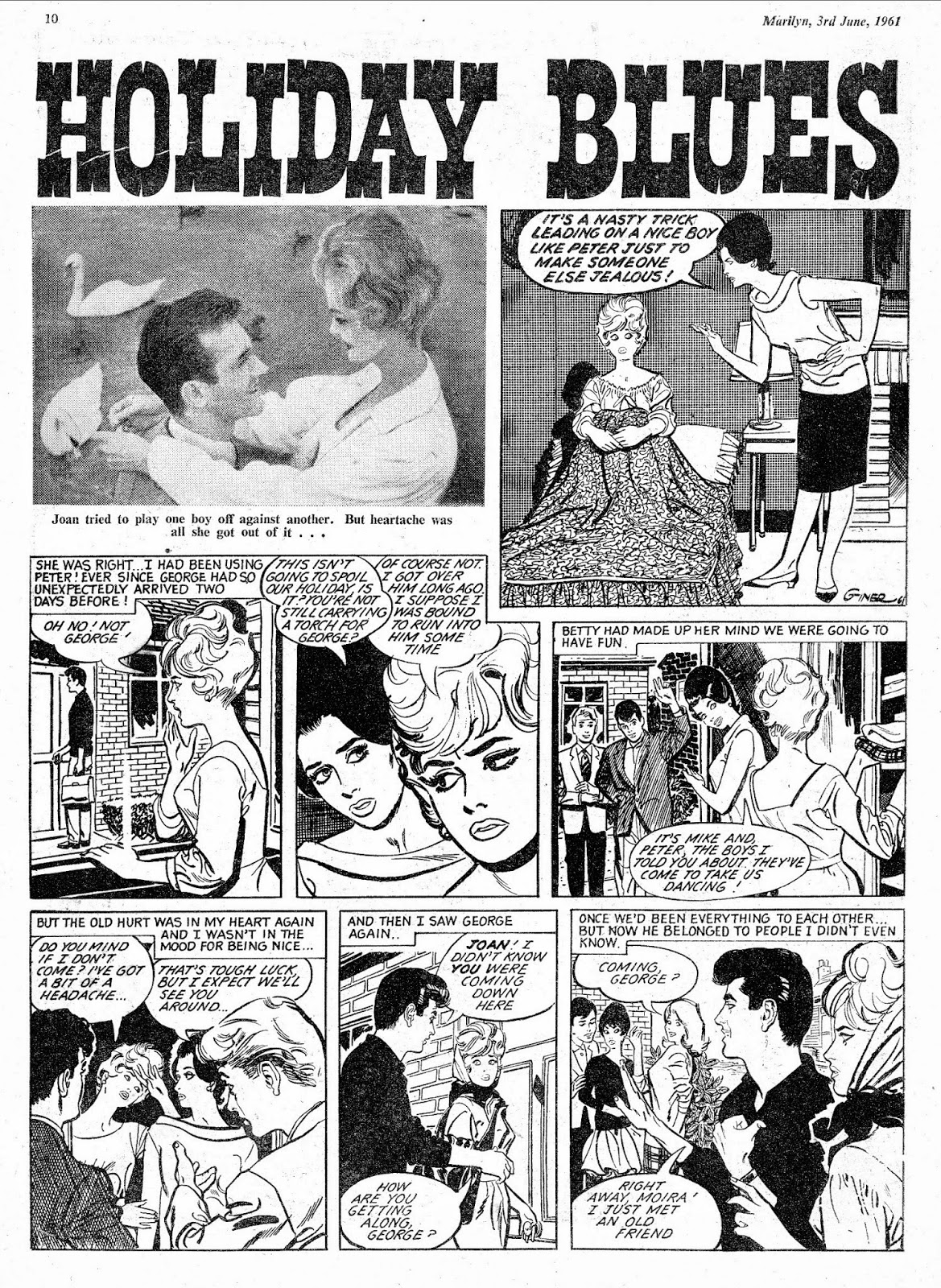 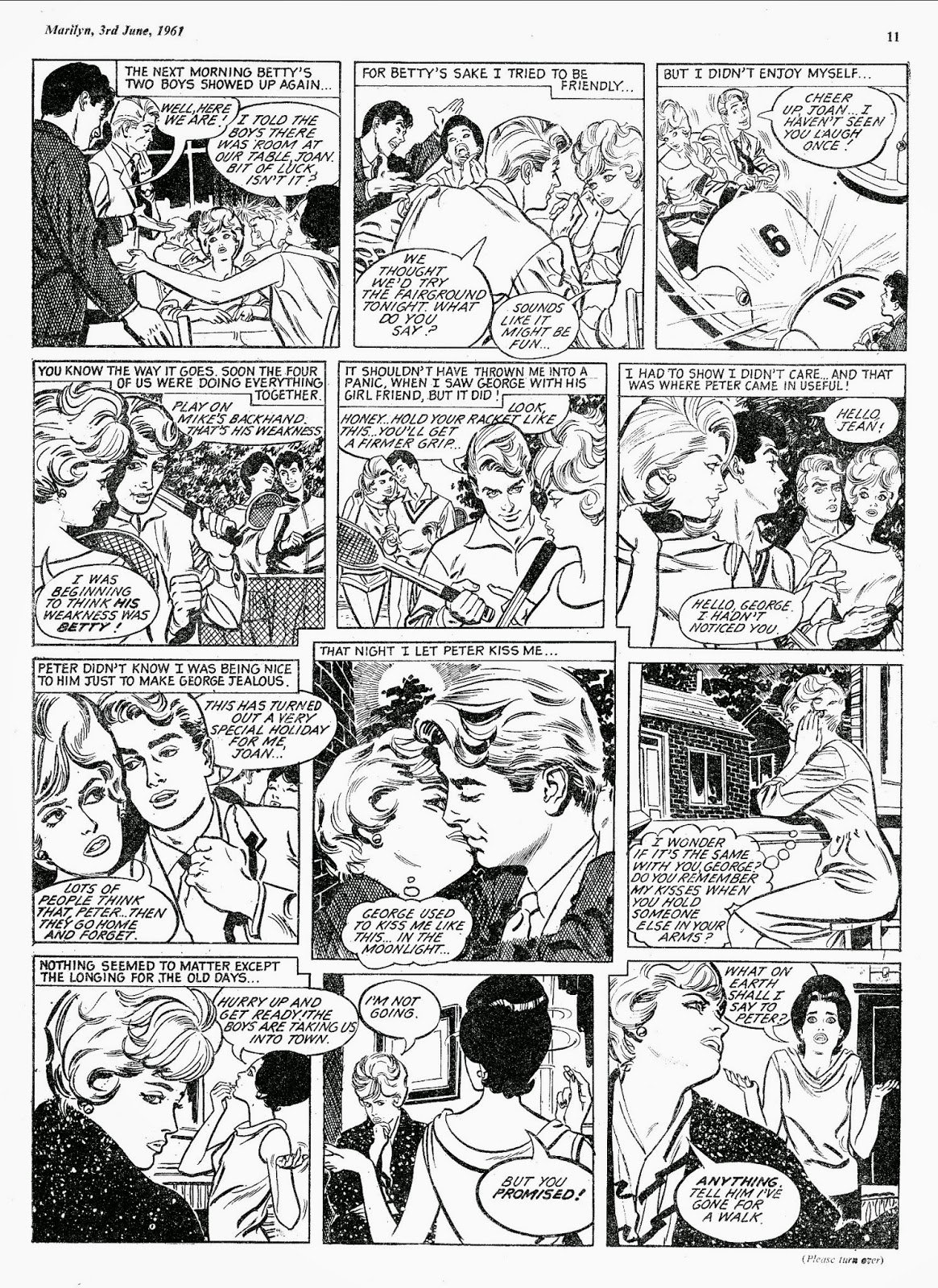 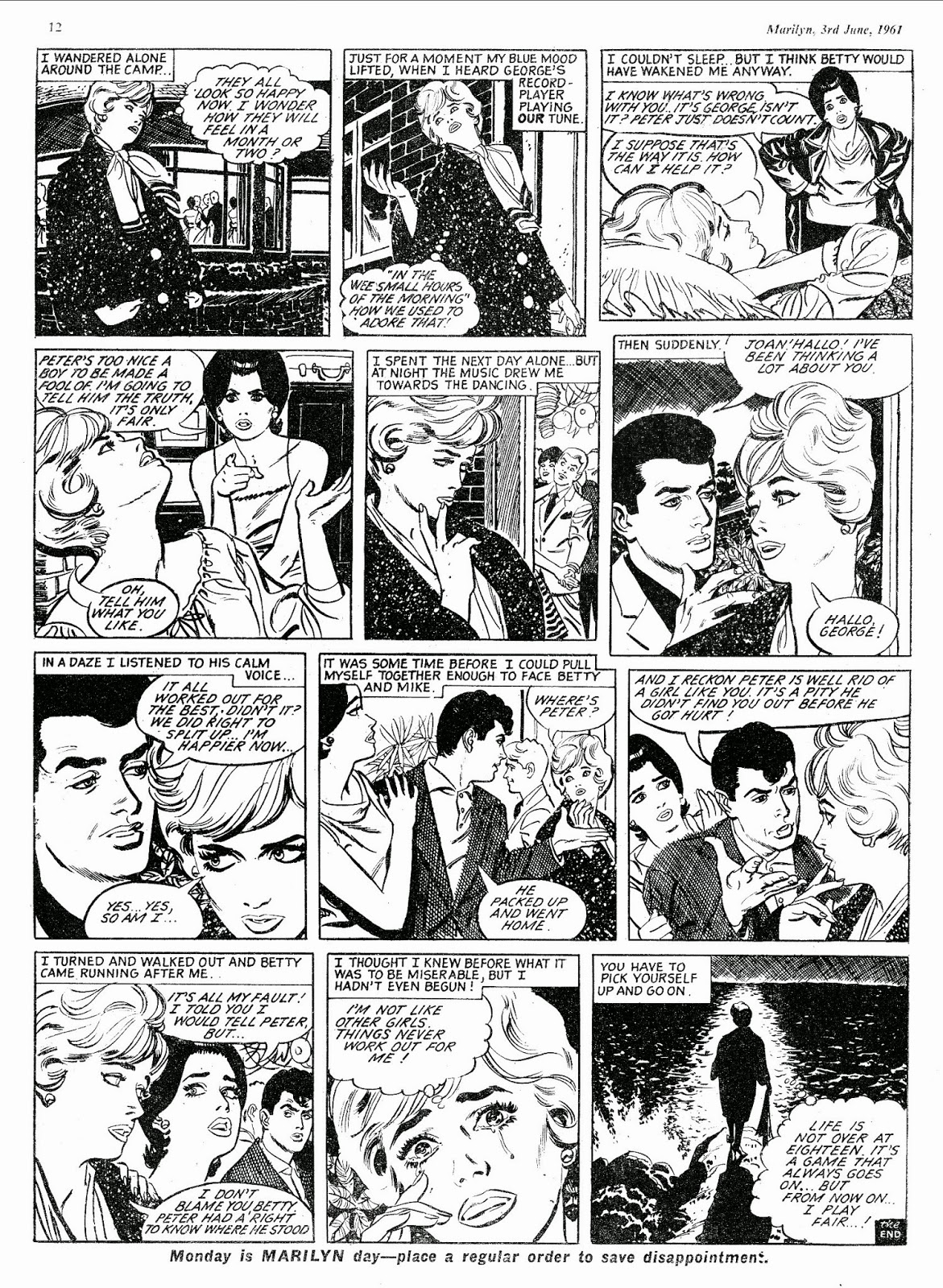 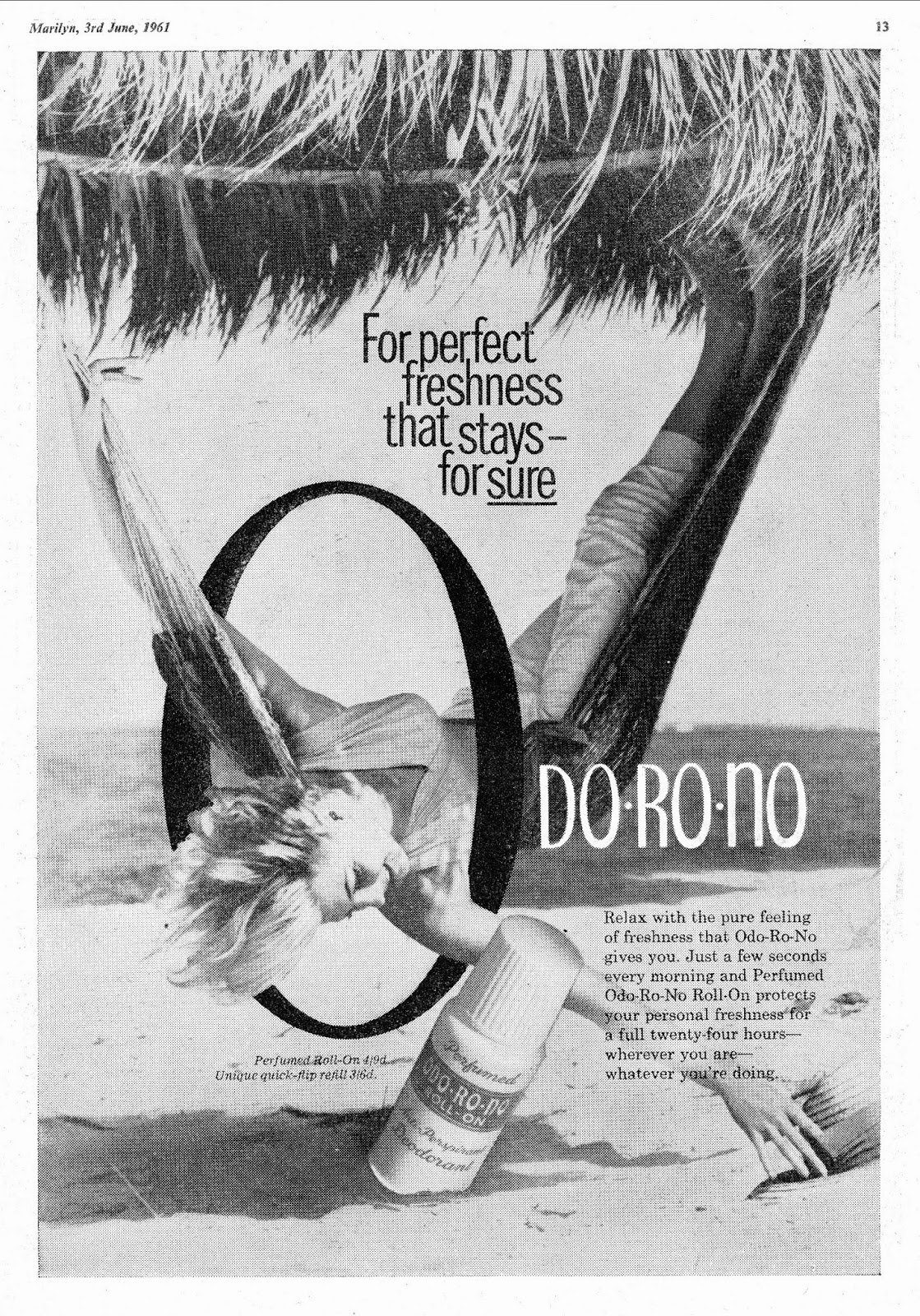 Next, a four page text story interspersed with ads and advice on the latest hot platters! British comics, more so than American, are an amalgam of sequential art and text features, so this is British comic tradition. Blogger Phil Rushton tentatively identifies the illustration as the work of prolific British comics artist of the period, Robert MacGillivray. 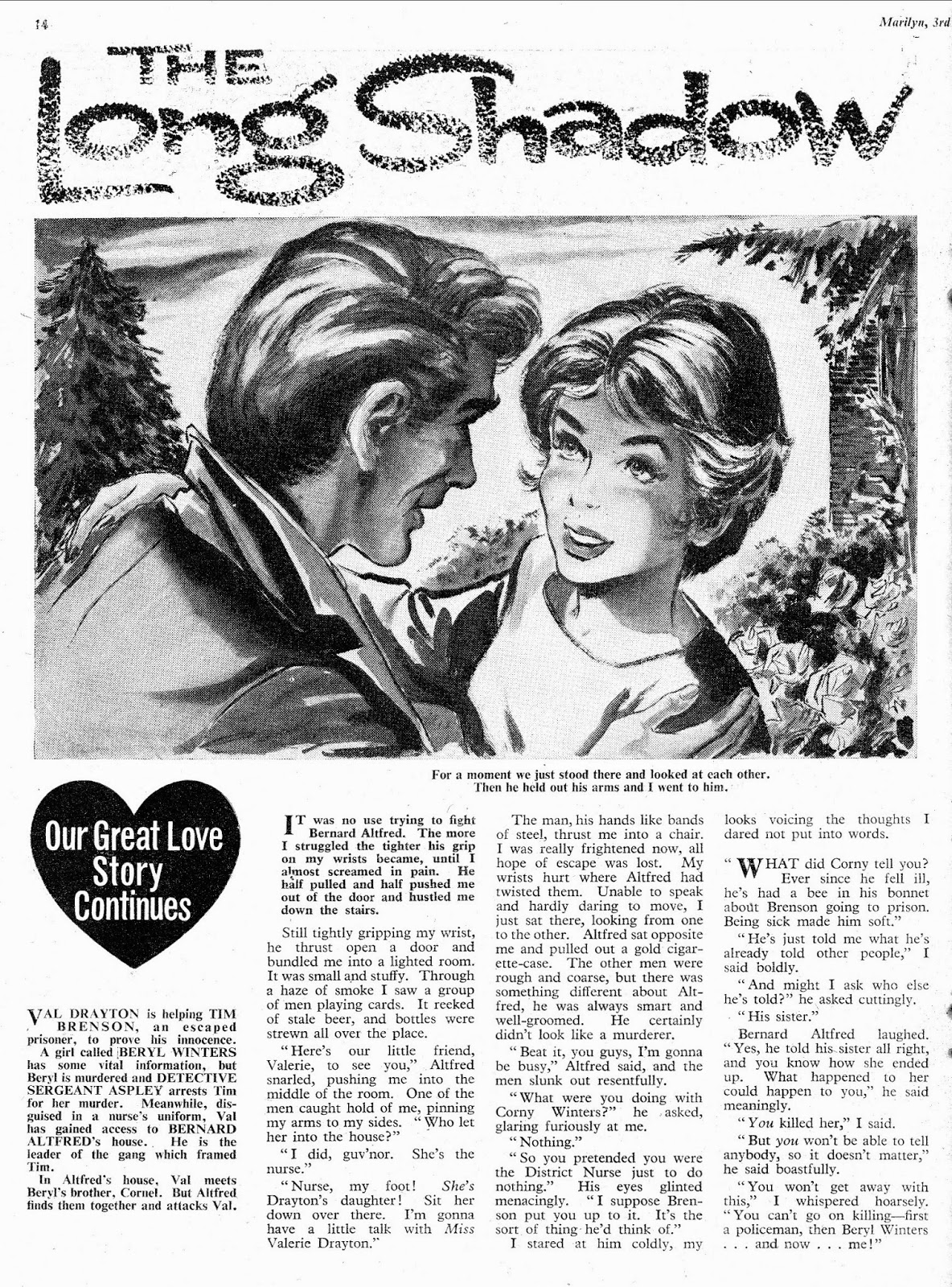 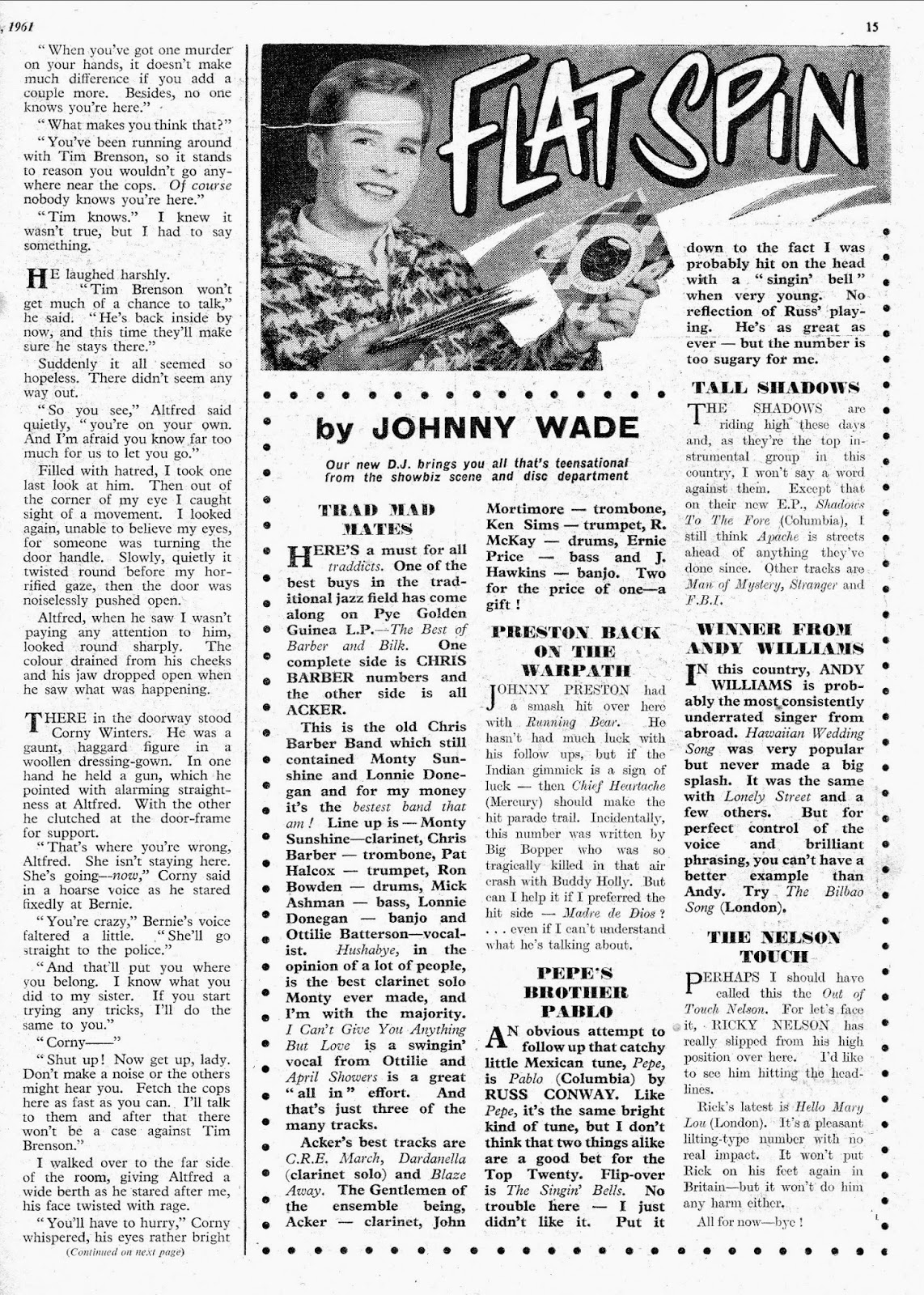 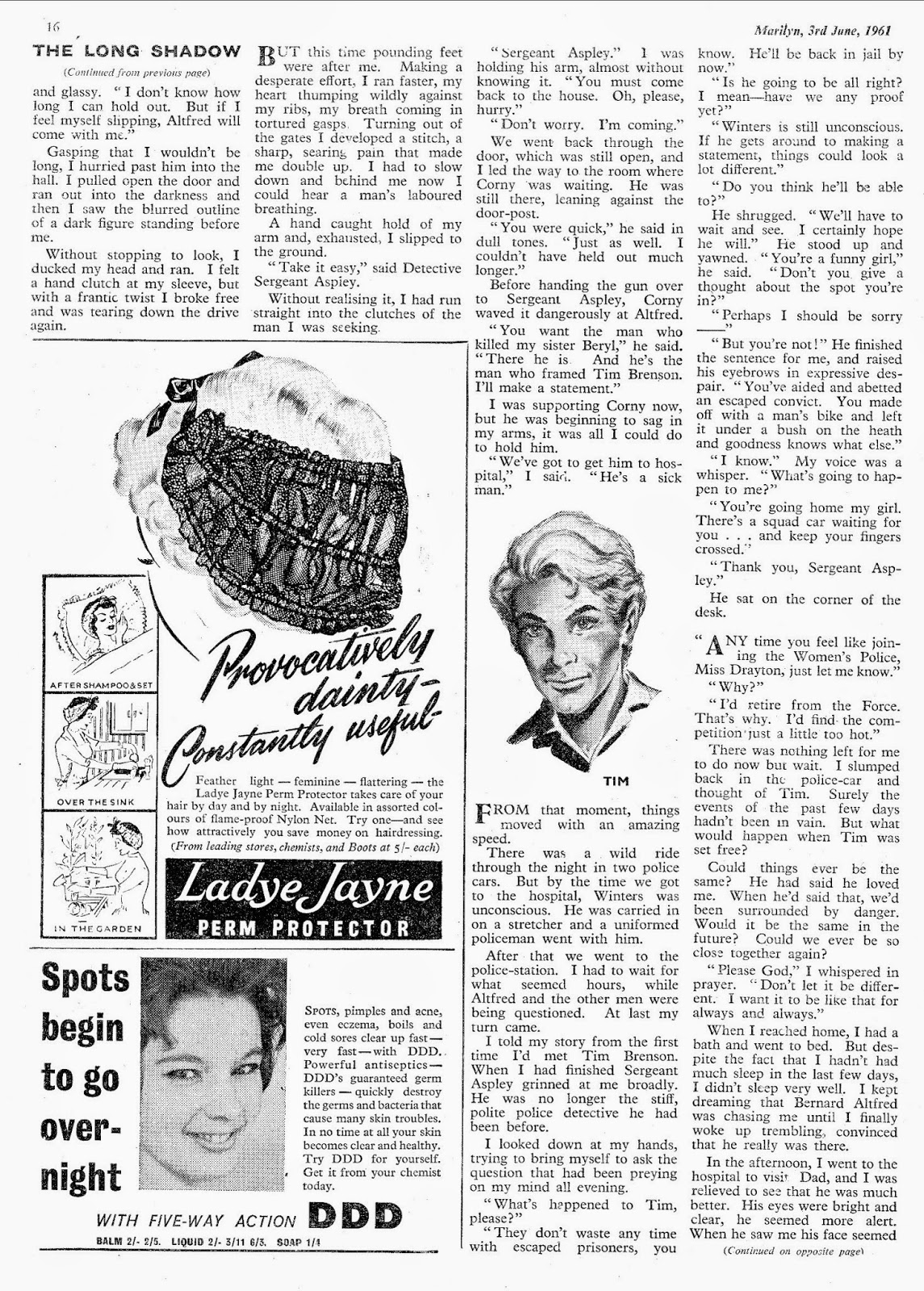 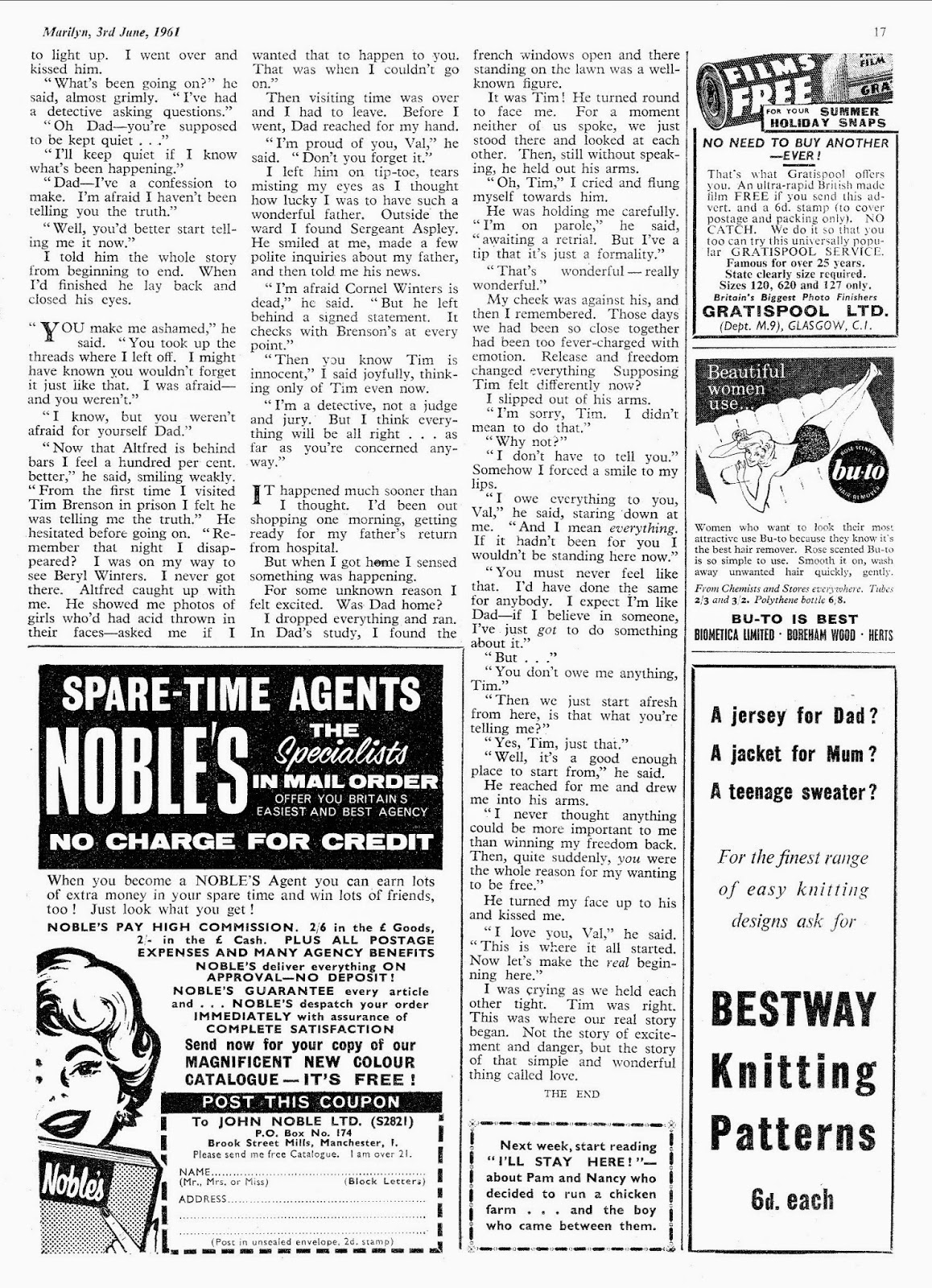 More nice artwork in this next three page story in which Pam finally finds true love! Thank goodness for that! With all the cautionary tales so far I was thinking there would be few happy endings in this issue! 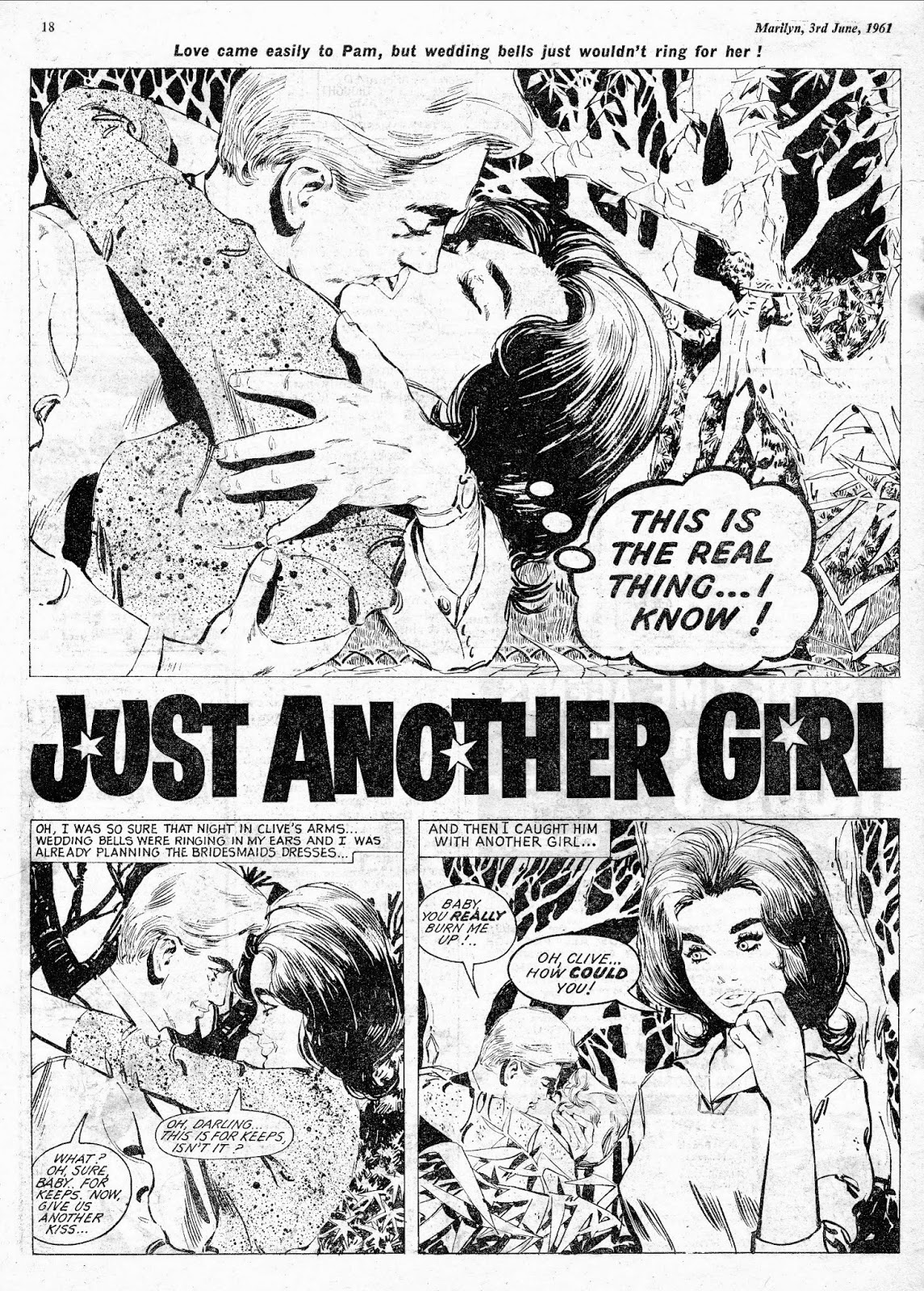 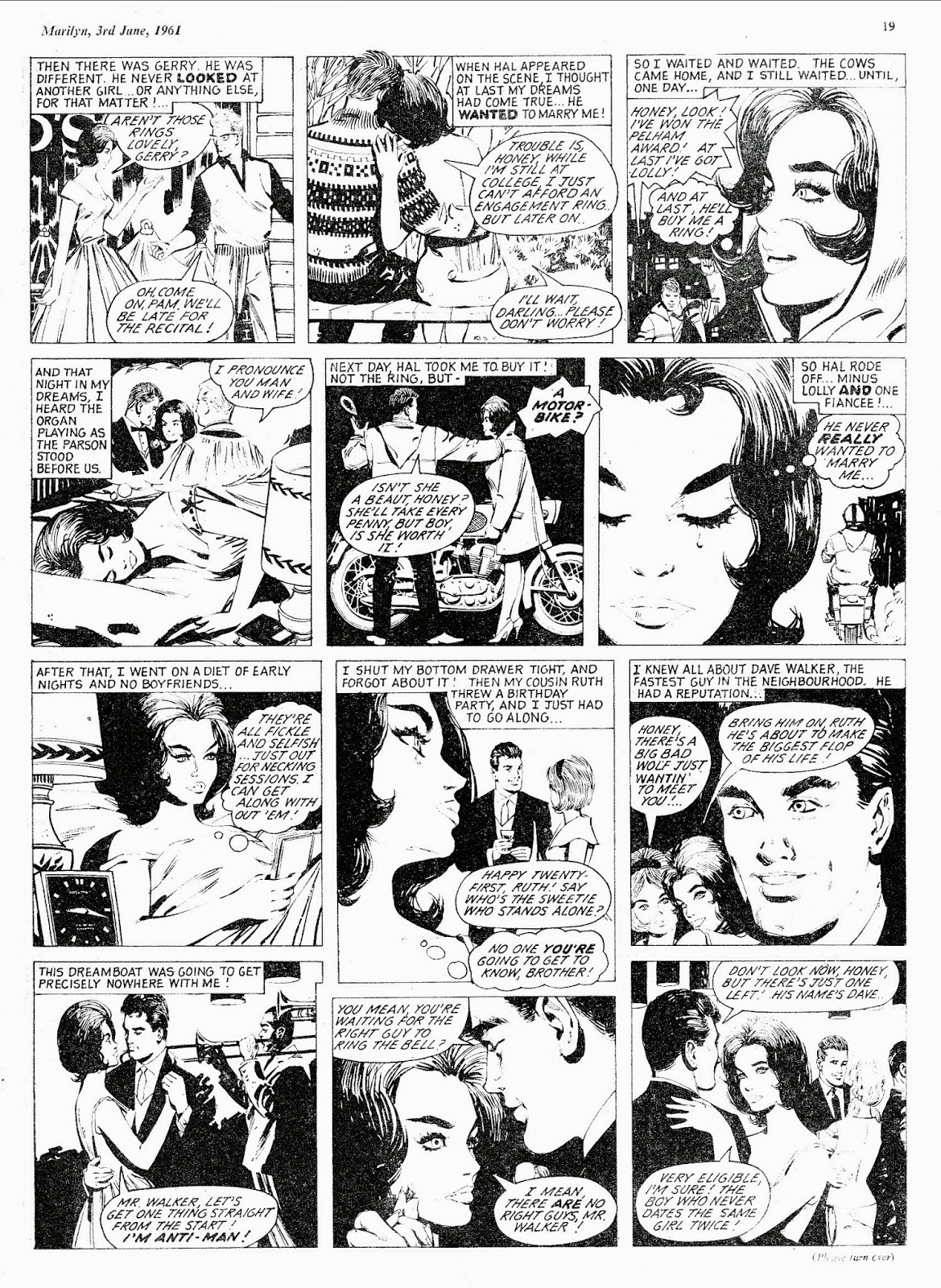 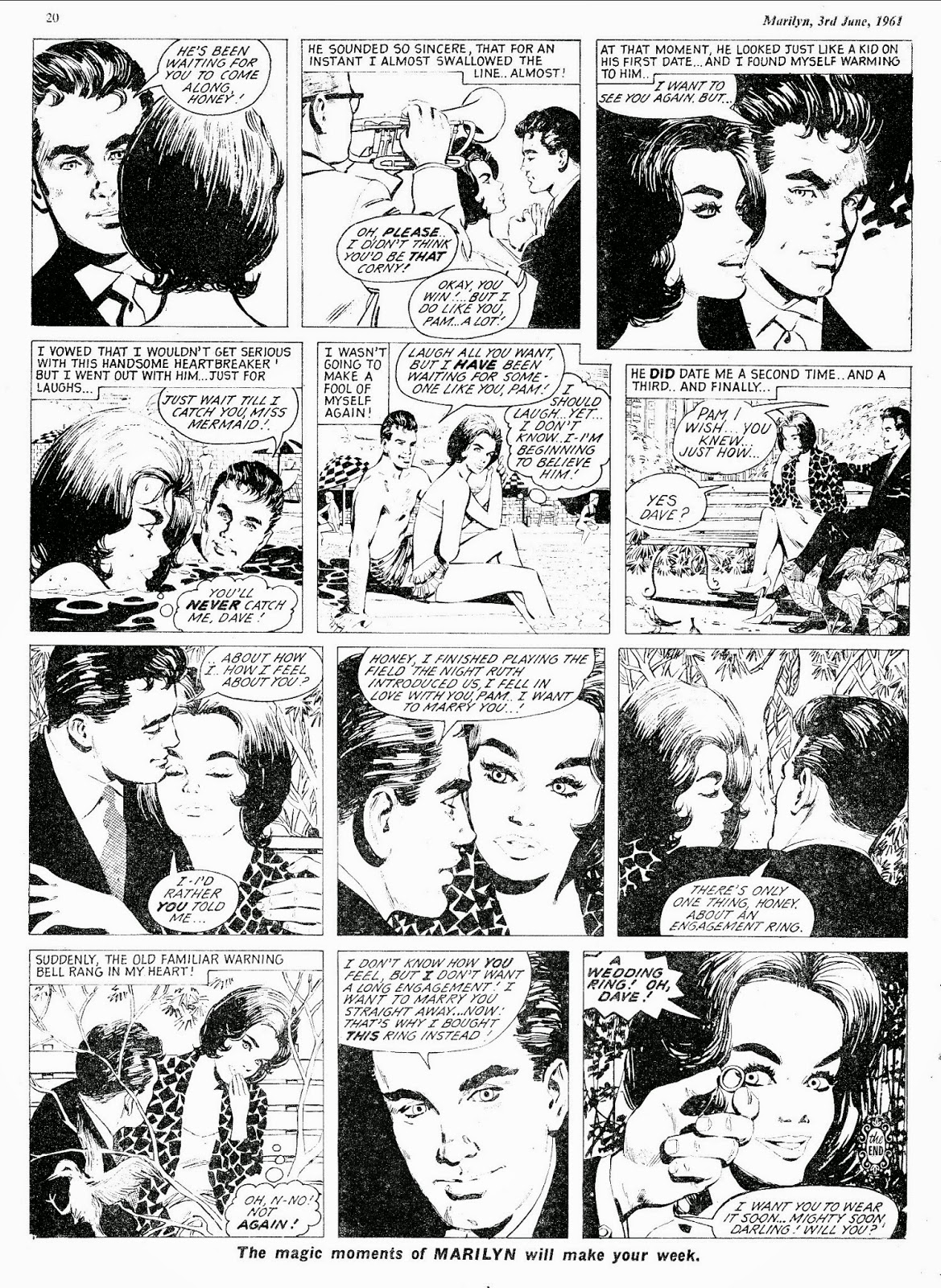 The next page... well, I have to be honest, I have never heard of the Allisons. It looks like they were trying to be a British version of the Everly Brothers, but their sound had a strong Buddy Holly influence. My wife remembers their song "Are You Sure", which made second place in the 1961 Eurovision Song Contest, and she knows all the words! Oh, and girls, don't forget to grab your copy of Honey! Don't be the one left out! 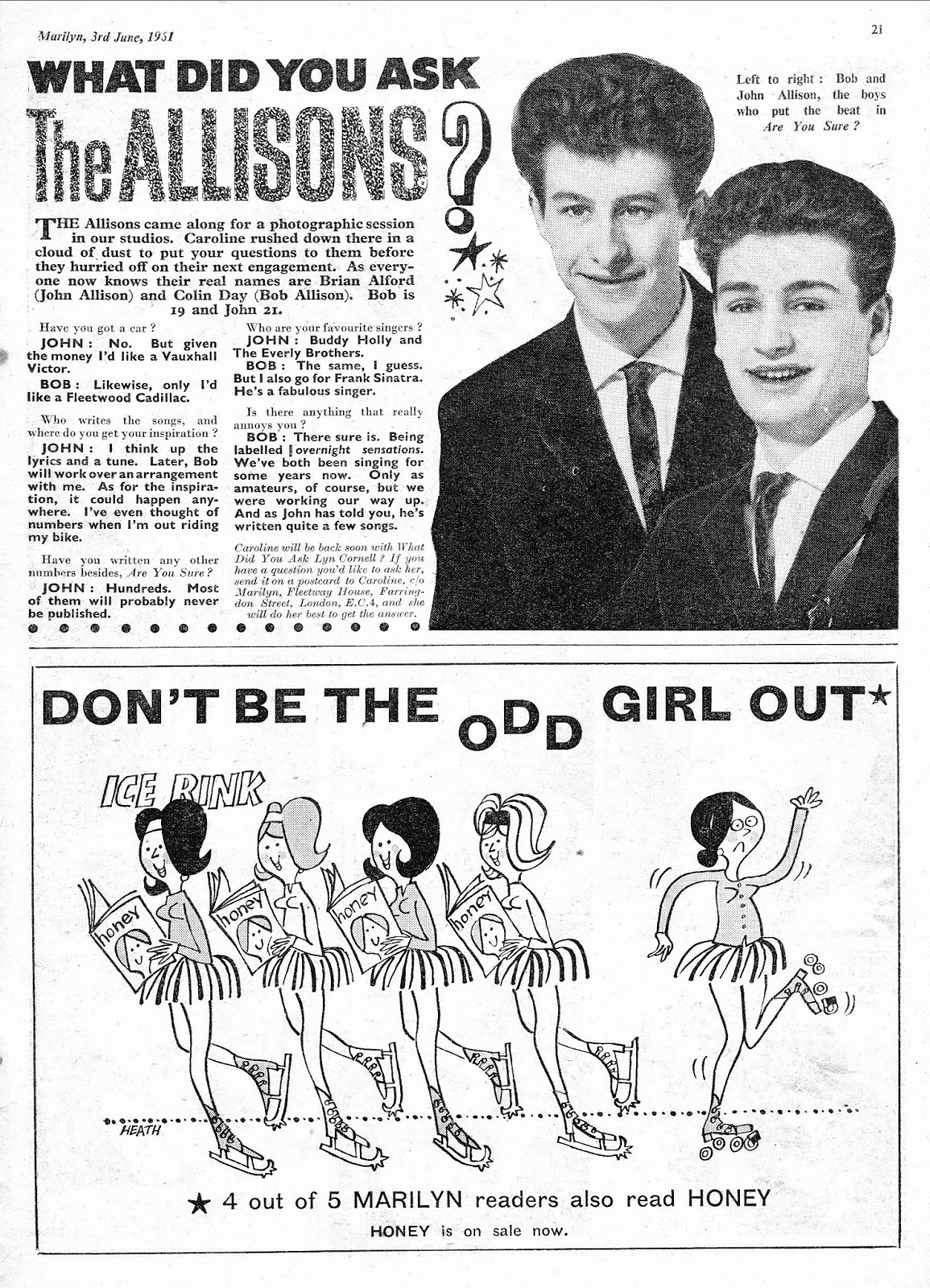 This next one also seems to be an ongoing saga - "The Heart of a Teenage Girl." Plenty of angst here, and also some fine artwork. Lovely last panel. 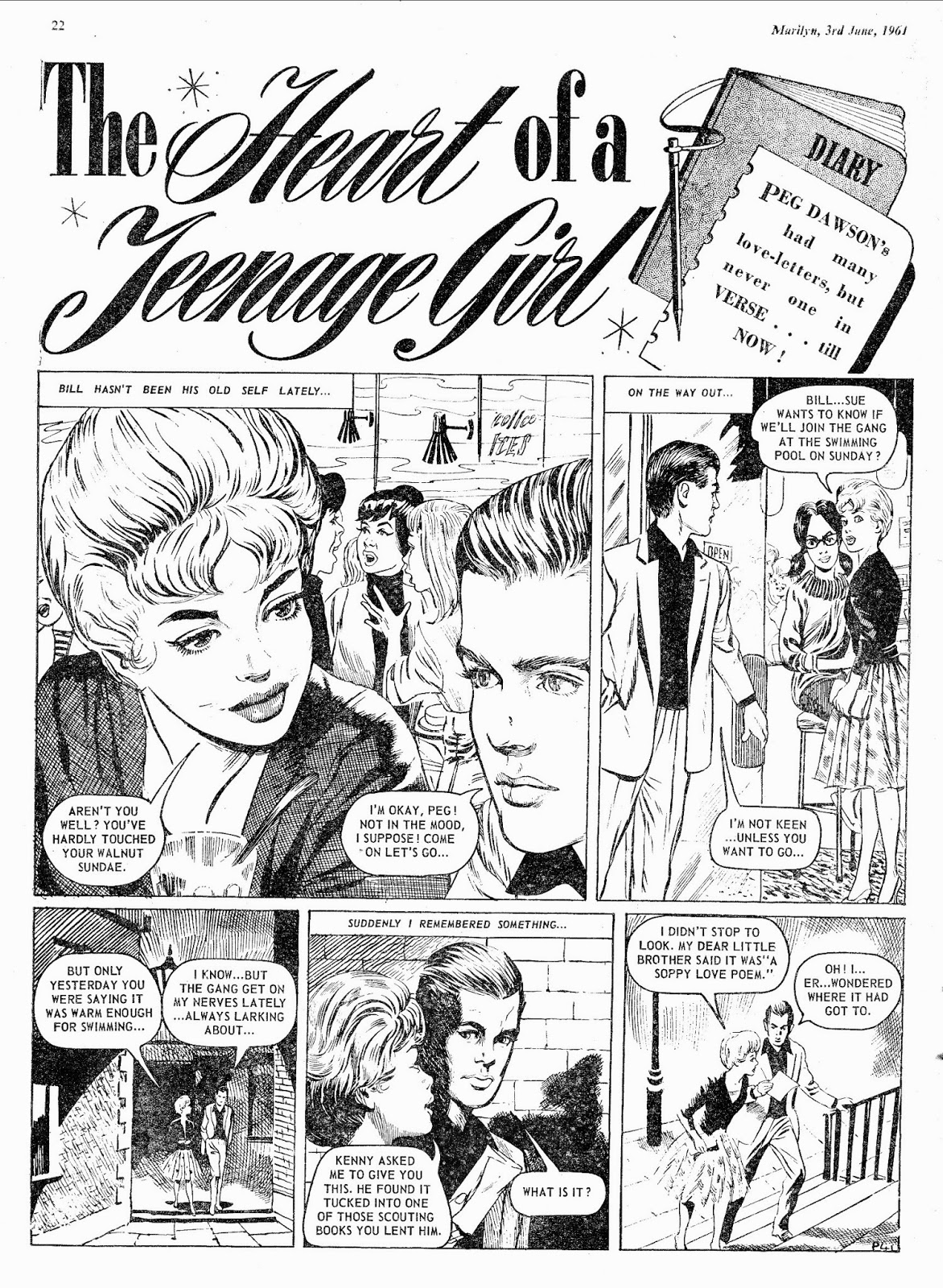 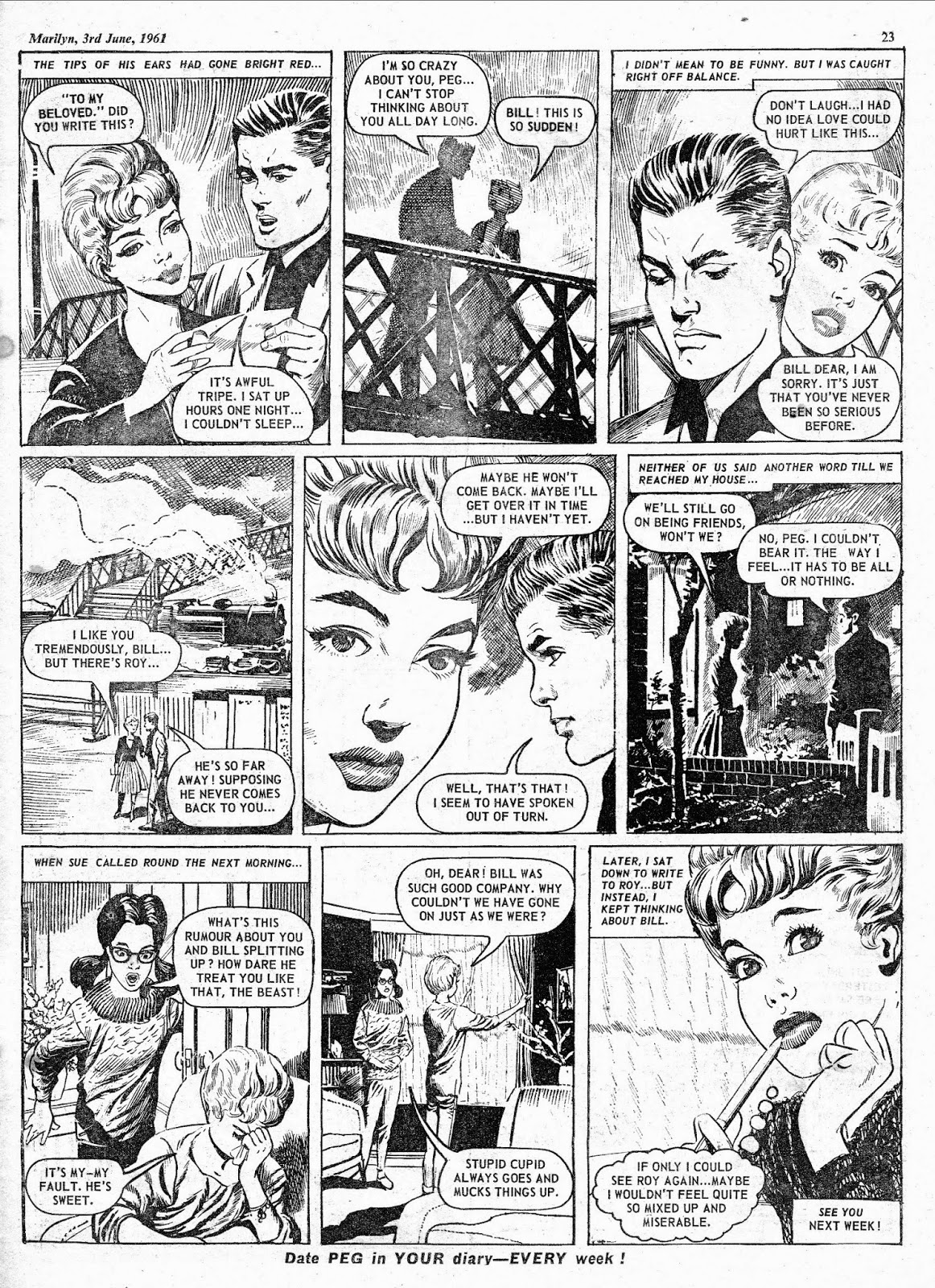 The half page ad on this next page tells you that males were not expected to be reading this comic. And they probably, for the most part, did not, in the gender polarized world of the early 1960s. What seems strange looking back, but maybe not, is that there was no equivalent to romance comics for teenage boys, nothing that dealt with relationships anyway. If you were into the military, sports, espionage, or imagining life as a space traveler, there was something for young males.

Quarter page ads for other romance comics by the publisher - Roxy, which as you can see looks similar to Marilyn, and the latest issue of Love Story Library - this is a digest-size romance title like the ones featured recently here on Out Of This World - complete this page. 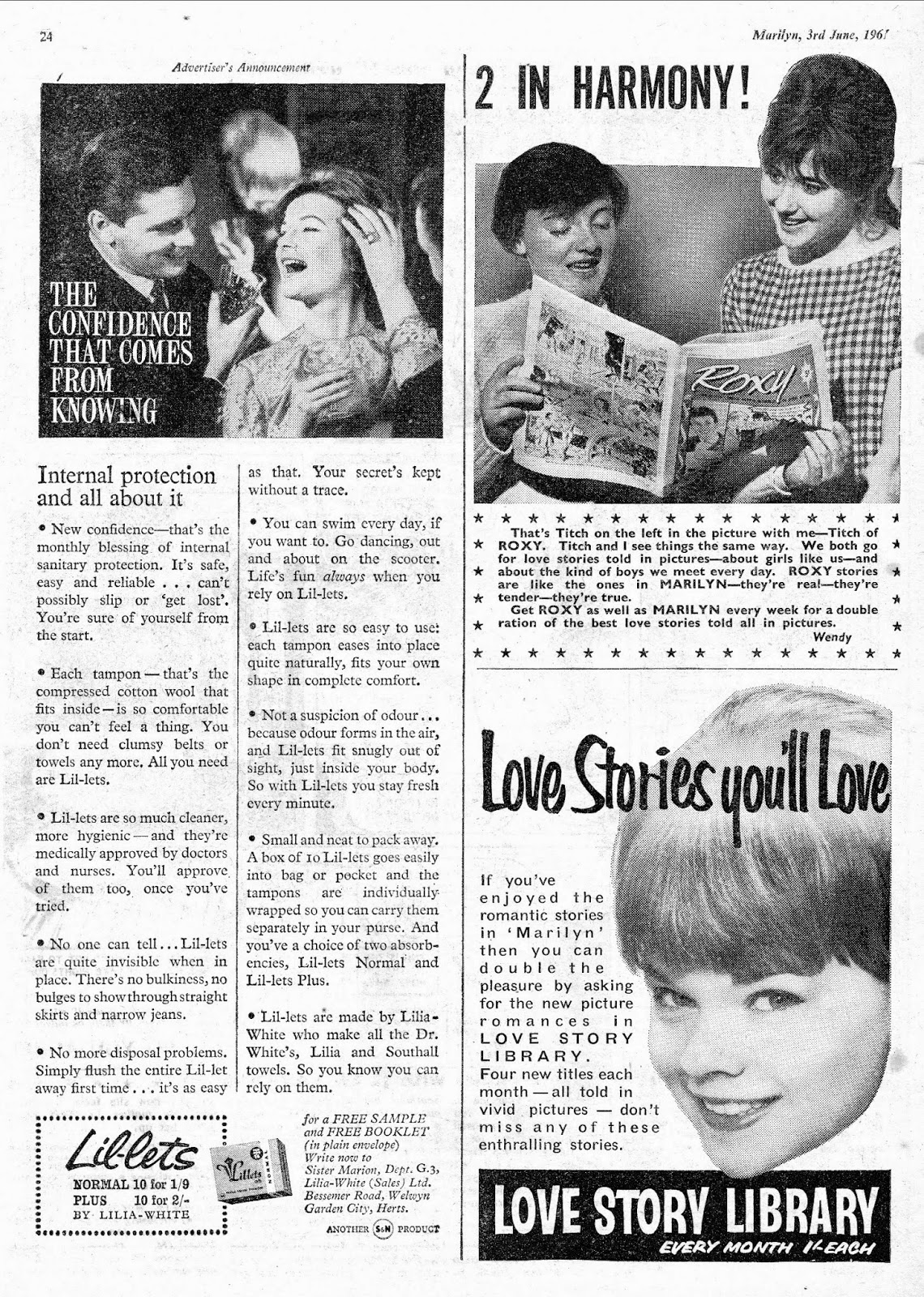 This next is an interesting version of the problem page. It presents some problematic teenage behavior and asks the reader to contemplate it. The more standard 'agony aunt' type exchange with readers is at the bottom of the page. 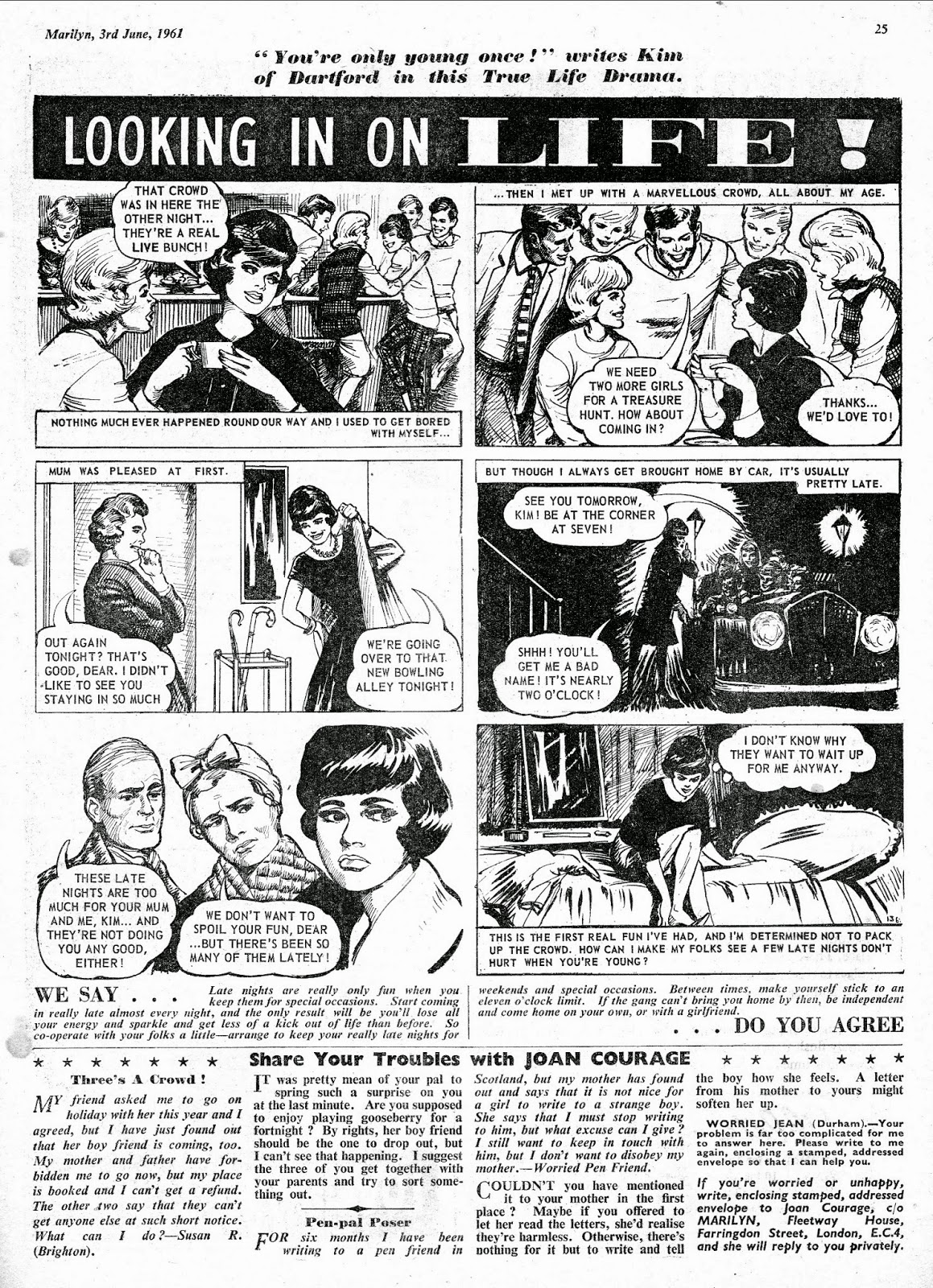 This last story is only two pages, and starts out like it's part of an ongoing saga. If so, this is the last installment of this particular story. The art is signed 'Julian' - identified by blogger James Zee as Julian Morote, another artist of the Selecciones Illustradas agency in Spain. 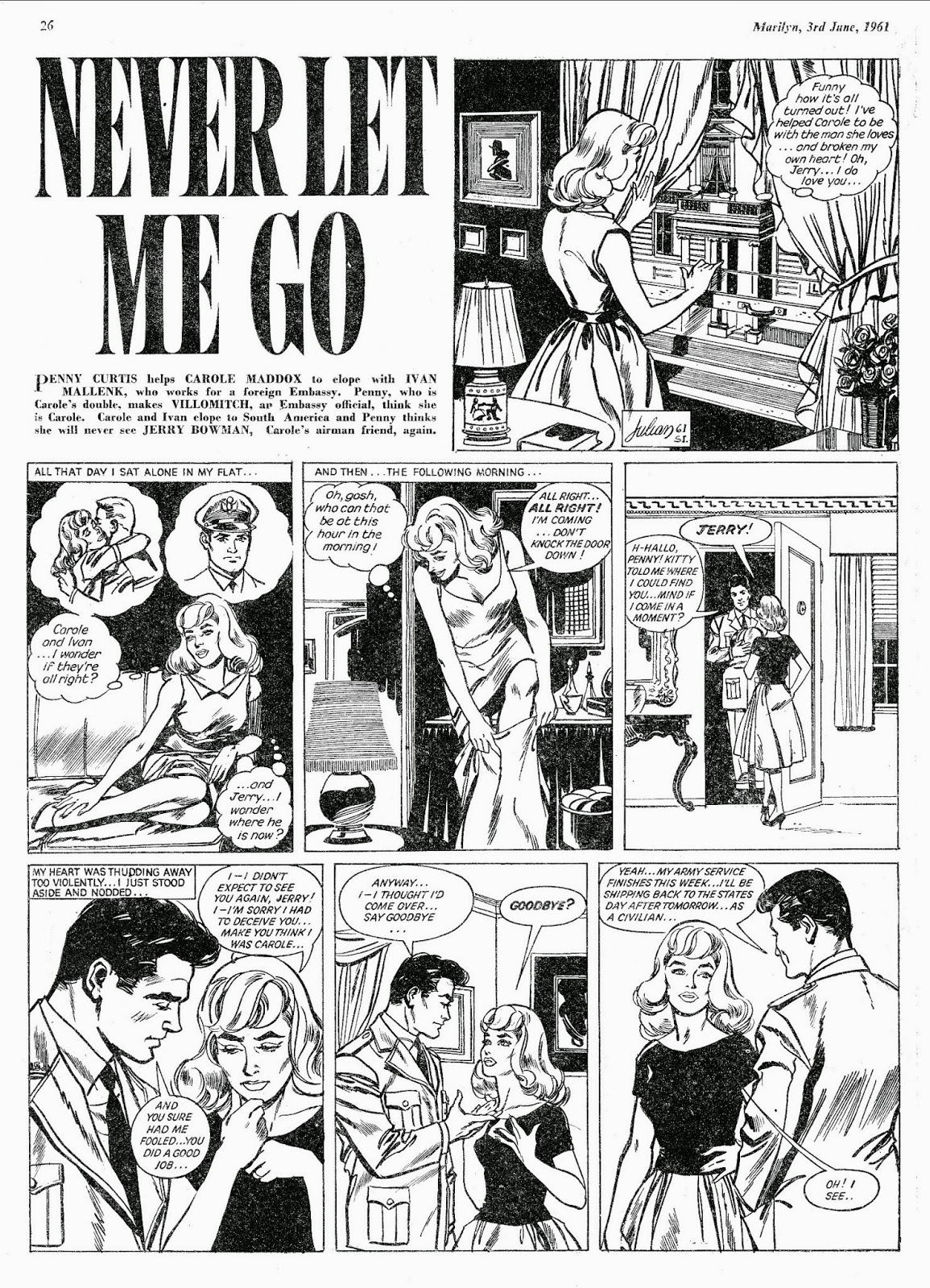 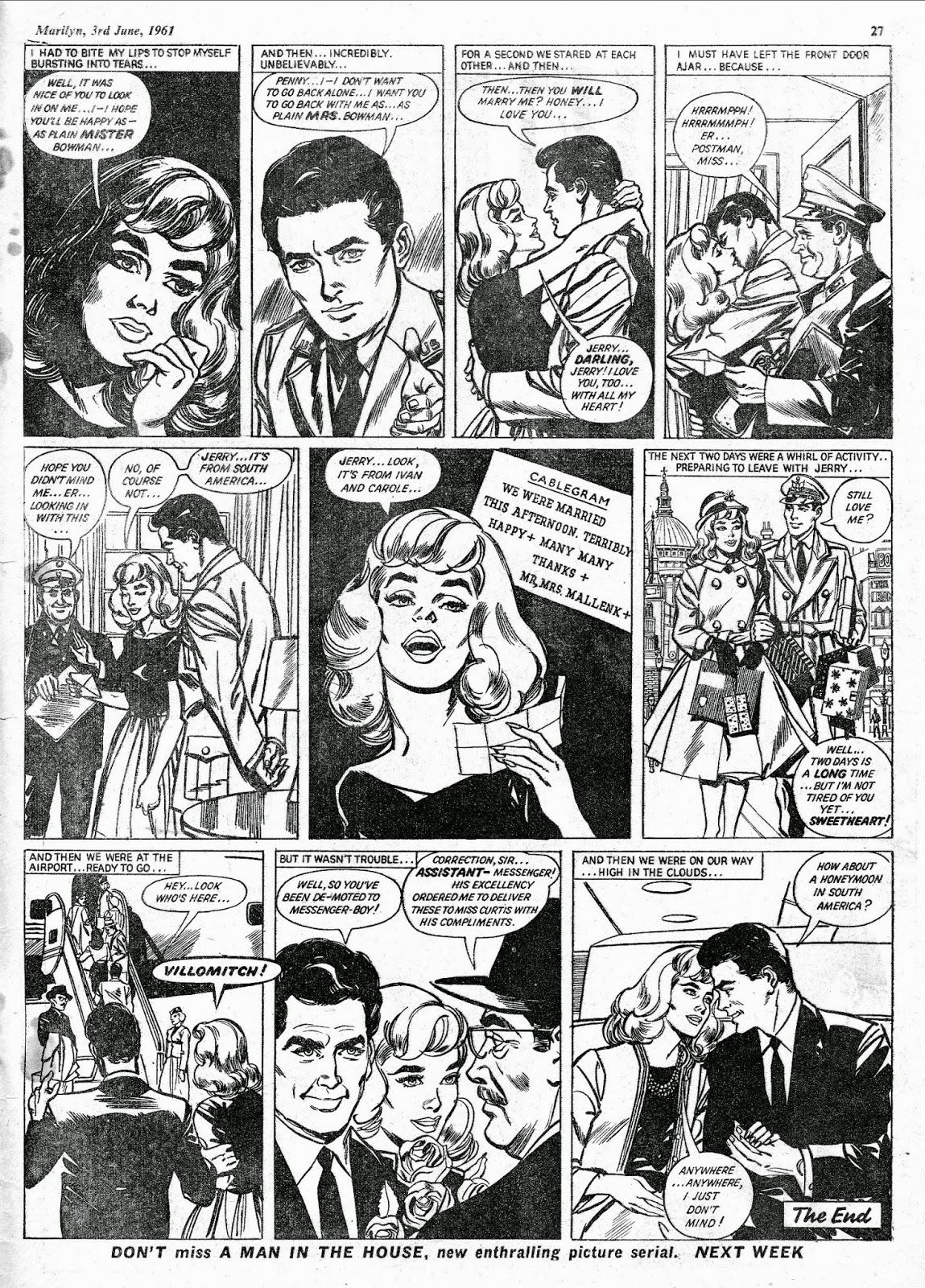 The back cover features a photo of Edd Byrnes, the star of the American TV series 77 Sunset Strip, reflecting the tremendous influence of American pop culture on British audiences at that time. 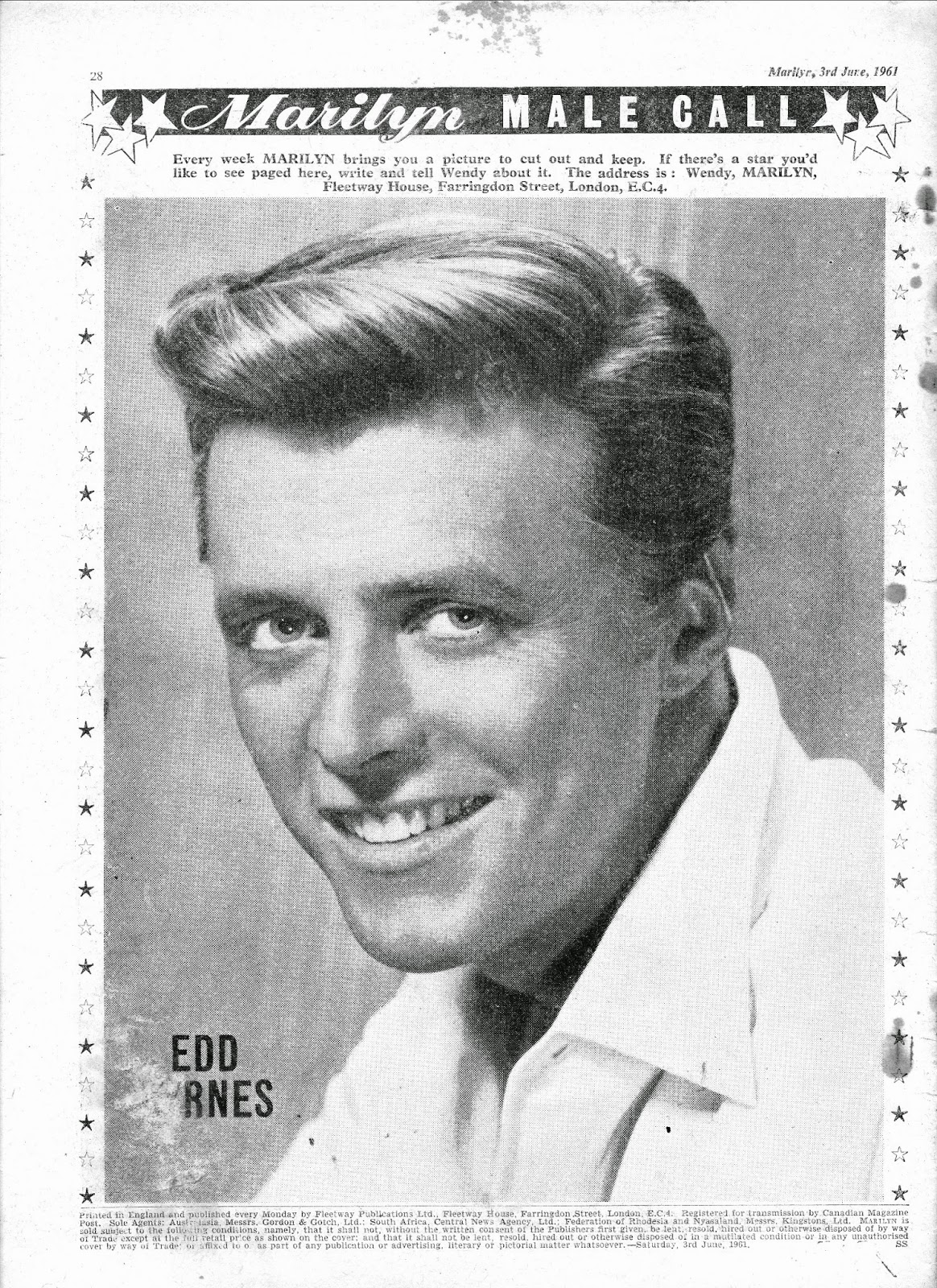 And that's it. 28 pages for five old UK pennies, while American comics were 10 cents in the USA and nine old UK pennies in the UK, so nearly double the price. The British girls also read American romance comics, but with the British weeklies they had more to look forward to because of frequency of publication. If you include all the digest sized British romance comics, I'd say there were a lot more British romance comics being published than American at that time. You saw from the figures earlier that their print runs were equivalent to their American competitors, but at least four times more frequent! In Aladins Bookshop on Hornsey Road, Islington, in London where I used to buy my second hand comics from the proprietor, Shirley, with her blonde Dusty Springfield beehive hairstyle, in the 1960s when I was a kid, there were large numbers of the digest type British romance comics of all types, probably more available than the American comics I was looking for. But it's all gone with the wind...   ...and on the subject of all things eventually having to pass...


***
R.I.P.
Leonard Nimoy.
May your voyage home to your final destination be full of beauty, bliss, and knowledge.
Thank you for everything you gave us.
***
Posted by KB at 9:40 PM 10 comments: